The estimation of dirty price requires the use of coupons in the desired time frame. The flows of cash occurring at different instances of time were discounted to arrive at the present value per period. This value was then added to arrive at the price on the time instances in question. The estimation of the price of bond had to be done in the course of coupon period. Thus, it(bond) value is judged and found in the commencement of the time frame. It is then compounded forward to the date when the pricing is to be determined. The interest accrued was computed by computing the days starting from the last coupon date and the date on which pricing is to be estimated. This method helps in determining the clean prices. 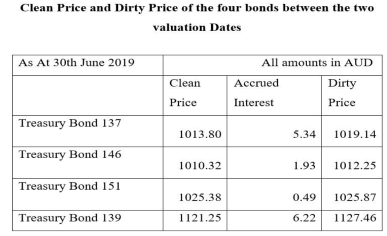 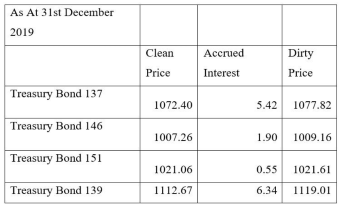 The notion of calculating the clean & dirty prices hold much importance in pricing of bond. The clean prices are ones in which are exclusive of the interest that has been accrued. However, in case of dirty prices, it is inclusive. The bonds in theory can be valued on coupon daets but in the practical world they can be traded(bought and sold) on a different date or time. Therefore it becomes imperative to adjust the interest that has been accrued on the bond. The person who is selling the bond will thus make payment of the dirty price i.e. the clean price and the interest. The one purchasing the bond will thus get the cash flow relating to coupon on the next scheduled date. Thus in theory, the price of bond in the market is the one which has both clean price and interest. Once the coupon payment is made then the clean price will be equivalent to the dirty price.

Sensitivity analysis is the tool used in the estimation of behaviour of output variables depending on the changes occurring in input variables. They are used as financial and mathematical model. By the use of this method we try to determine the what if scenarios in the market. This model tries to find out and simulates the outcomes wherein the range of variables is given. 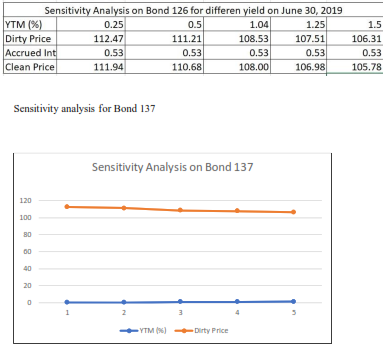 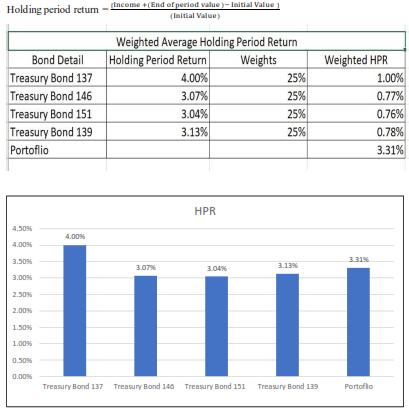 The above discussion about the holding period return shows that there is a significant difference in the yield of HPR and YTM(yield to maturity). The reason for this is the time frame for holding period is not same as the time frame for YTM. In the former case the asset class can be sold on any date whereas in case of the latter the asset has to be kept in possession till it matures. Thus, in former case the return gained will be dependent on the fact that for how many days the asset was in possession, so the yield also depends on the same. This method is also utilized in the comparison of asset/bonds having variety of maturity dates and dissimilar yields. This method also helps the traders and investors to find the best performing bond/asset. It can also determine the profit it is making, and the length of time it should be held to generate the

amount of profit determined previously. This method assists in balancing the bunch of assests in possession to maximize profit. It provides assistance in computing whether the bond should be sold in the scheduled time frame at a premium or should be kept in possession till it matures. It thus finds out the best case scenario. The period of holding in this answer has been accounted as 6 months. It is assumed that the bonds taken into consideration in previous questions were bought on 30/06/19 and sold on 31/12/ 19. The holding period return is highest for bond 137 and lowest for bond 151. Let us assume that equal amount is invested in all these four bonds then the return percentage comes to 3.31%. This is higher than the individual returns of the most bonds.

The prices of the bonds and their yield are related to each other. When they are plotted on a graph against each other, they form a curve pattern. The curvature of this graph is known as 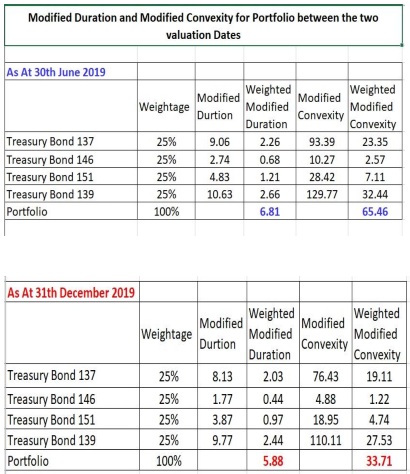 As shown in the above table, Bond 139 has the highest convexity and Bond 146 has the lowest. If assumption is made that all the other things are equal then, Bond 139 will be priced higher than Bond 146 when there is significant positive or negative variation in the interest rates.

Let us assume that there is a bond which has coupon rate of 5% PA. In a scenario where the interest rates show escalate above 5%, the holder of the bond will want to sell it because it is giving lower returns. They will want to invest in some other instrument which will give higher return for example some new bonds. This proves that the price of the bond is inversely proportional to yield to maturity. As the date of maturity nears, the yield shows slackening.

When the interest rates of various bonds having different maturities are plotted on a graph, taking interest rate on one axis and maturity on the other at a given instant in time. The curve obtained is called yield curve. The bonds awhich are taken into consideration in the above case have homogeneous credit quality The slope computed for the curve formed in above case helps in the determination of variation of economic activity vis a vis interest rates.

The spot curve is constructed with the help of spot rates hence the name. It computes the yield that is utilised in disciounting a single cash flow at a given instance. Theoretically, if the slope of spot curve shows elevating gradient, then similar thing will be noticed when we plot the par curve.

The curve denoting the prices at which execution of contract can be done in current time is called a forward curve. In reference to the above scenario, the forward rate curve changes its direction from an initial direction of upward-slope to a downward one at a later stage. This is shown in the diagrams below. (on 30 June and 31 Dec 2019). 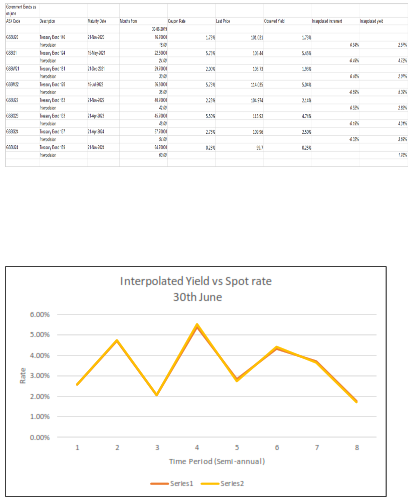 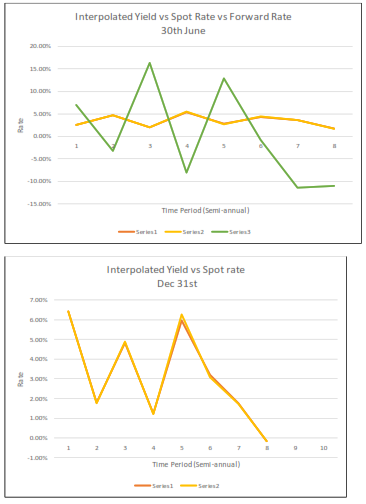 The forward rate is a tool that measures the price of an asset at an instance which lies in future. Generally, the contract or the agrreement is done in the present date. The price is agreed upon by the parties involved and delivery of the said asset will be happening in future. The time frame for delivery may happen in near future that is in a few days or in late future example, in a few months. The forward rates are specifically utilized in case of Treasury bills.

The forward rate can be utilized in judging and computing the future spot rates.

This theory can be comprehended and analysed in the below given ways:

The market segmentation theory propounds that the participants of the market will not prefer to change the time frame of their investments even in the case of their getting profits. This profit is generated by forecasting and projection of future spot rates vis a vis forward rates.– (Fabozzi 2013, p. 127).

There are fats that prove that future spot rates rates can be envisioned by studying and analysing the forward rate. This is true in case of short-term maturities (1 month). However in case of bonds having maturities longer than that, this proposition does not stand true (Fama 1984). In the paper by Campbell and Shiller in 1991, they adopted a vector auto regression approach to check the validity of the term structure with observed US Treasury bill data. The study conducted by them also denoted that above mentioned statement holds correct for short term instruments. Again it doesn’t hold good in case of long-term instruments/assets/bonds (Afanasenko et al. 2011).

There are other studies such as one conducted by (Buser et al. 1996) which computes forward rate and adjusts it for biases and risk premium. Buser et al. (1996) suggest that forward rates between 1963- 1993 which have been calculated with relevant adjustments are in fact a good estimate for future spot rates.

The above-mentioned conclusions of the study are refuted by other researchers whose conclusions are different (Fama in 1984 and Cambel and Shiller in 1991. Assumption made in the theories that one single yield can be utilized for discounting is incorrect in real life situations and thus causes wrong estimates. The theories should account for the unnoticed reinvestment risk and risk premium.

The forward rate can be calculated using one of two metrics:

Spot rates – The assumed yield on a zero-coupon Treasury security

The yield curve is the most commonly used tool to estimate the forward rate as compared to spot rates. It has more clear indications of current and future market trends and the estimation of rates and prices.

The spot rate shows the yield for a time frame. Market spot rates for certain terms are equal to the yield to maturity of zero-coupon bonds with those terms. Normally speaking, the elevation in the spot rates also elevates as the time frame. But this is not always the case. Thus, bonds which have maturities in later time frame will have elevated yields as compared to ones having closer maturities.

Yield to maturity (YTM) is the total return anticipated on a bond if the bond is held until it matures. Yield to maturity is considered a long-term bond yield but is expressed as an annual rate. In other words, it is the internal rate of return (IRR) of an investment in a bond if the investor holds the bond until maturity, with all payments made as scheduled and reinvested at the same rate.

16) Mangiero, G. A., Qayyum, A. and Cante, C. J. (2019). An excel-based method to enhance the study of “Duration and Convexity” in financial management education. Journal of Education for Business, pp.1-6.

17) Melik-Parsadanyan, V. (2016). The Arithmetics of Par, Spot and Forward Curves. International Journal of Economics and Finance, 8(12).