In then given questions below the basics of economics are explained in a precise and concise manner. These questions will help in grasping the basic knowledge which is required to understand such a vast subject which important for every country. With demand and supply it will enable the readers to get an idea of how the economy is entirely dependent on both these terms to be effectively in equilibrium. With the basics of econometrics it is supporting the readers in a manner by which will help in data forecasting and analyzing. In addition to this, the best part about this assessment is it is enabling the readers to get a better knowledge of the current economic scenario and status of the country of South Africa.

1. According to this assignment we may understand that South Africa amongst those countries in the developing world’s that has suffered labor related challenges and also trying to stabilize the economic development as these challenges are being addressed in different ways by the government, local organizations and other international non-governmental organizations. When it comes to the characteristics, your points shall revolve around the market having trade policies, having macro-economic approaches, high demand and growth of labor, job creation aspects, institutional development for labor markets, labor gaps and so on (Nicoli, 1998), hence some of the traits to take note of.

When it comes to the challenges facing labor markets in South Africa, it is significant to take note of a number of them which include unemployment, labor insufficiency, poor policies, lack of political will and support, governance issues (Nicoli, 1998). Furthermore, it is also critically realized that the shortage in skilled labor availability also creates a gap in labor supply in the South Africa's market hence another problem to look at and take note of as well (Mosomi and Wittenberg, 2020). Therefore, these are some of the points you can as well consider when developing your response towards this assignment, use the sources below for more examples and information.

In a general perspective, understand that South Africa has a positive economic growth trajectory that has been maintained since 2003 and this started losing focus in 2008, this was as a result of world financial crises just as other world economies are usually affected in terms of fluctuations and changes in the currencies as well. This led to problems examples such as the unemployment meaning the rates of employment really went down as a result. Also the policies are not that sound and effective, for example the minimum wage policy tends to raise the wages at the top this has caused a stunted growth for the wages in the middle class, hence some of the crises challenges to take note of.

Whereas, taking into consideration the Phillips curve in a long run situation, is a vertical line with inflation and unemployment in the y and x-axis respectively in the graph. In the long run Phillips curve assumes that at the employment level of nature, employment and inflation are not related to each other.

4. The relationship between labor supply and that of elasticity in South Africa’s public sector with the help of the education system. Supply elasticity is increased through education driven initiatives. Expressed in an unexpected way, training driven activities are utilized to build factors that will, thus, increment supply elasticity (Hendriks, 2016). This merits

emphasizing: the point of supply expanding training tasks ought not be to diminish the quantifiable abilities lack (contrast among gracefully and request at the current normal pay level) to zero, as a little yearly deficiency demonstrates a sound year-on-year development popular - a pointer of industry development. The inelastic flexibly bend gives a circumstance where for a given compensation, the alumni are not a lot of ready to convey their work and the reasonably versatile elastic supply curve shows a specific increment in the supply of labor, with an expansion in compensation (Jhinghan, 2016: 94).

Yes, it is possible to get an upward sloping demand curve in certain cases such as:

For the above describes cases the demand curve is like the curve shown below where with the increase in price quantity demanded for goods increases. 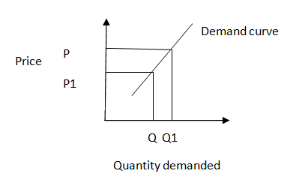 2. The line B1 represents the consumer’s budget line. A budget line shows various combinations of two products which can be bought with a given budget at given rates of two goods (Tucker, 2008: 158). It is a negatively sloping line because consumer wants to purchase more of one commodity then he has to sacrifice some amount of other commodity. The slope of budget line depends on the prices of two commodities.

Current economic scenario of South Africa is as follows:

· Real national income in 2020 is projected to rise 1.1% and 1.8% in 2021 due to domestic and global slowdown but now this also seems vague due to the current pandemic the world is facing of Covid-19.

In order to curb all the above crisis the govt. should apply an Expansionary fiscal policy as it will make the flow of funds more effectively to the hands of the general public(Hendriks, 2016) and its impact are as follows:

So, higher the investment higher will be the GDP.

b) Relationship between real rate interest and investment is Negative.

Higher the real rate interests lower will be the investment because people will more tend to save than consumption which ultimately reduces the investment hence they are negative relative.

The interest rate is opportunity cost for investment. So they do not move in same direction hence negative relation between them.

Let’s take an example, suppose we have a regression equation showing income changes due to change in education and age.

4. Though regression analysis has been widely used in statistical analysis it is not the ideal method for all causal relationships. Since, this method works on an assumption that there exits a linear relationship between every variable under analysis. An example will be an analysis between age and financial independence. Young adults will be stronger financially, at some point it levels of the as they get aged, the independence declines hence a curve, statistical information built on regression will misrepresent such important information (Gujarati and Porter, 2017: 19).

The presence of outliers can easily lead to a skewed conclusion in findings. Regression analysis is also too sensitive to outliers. Since the model capitalizes on means in computation of information thus failing to provide useful information on extremes that could be desired (Estela, n.d).

With the above done analysis on the questions it has enabled a huge understanding on the basic concepts of economics and how the economy will be functioning with the forces of demand and supply in order to get stabilized in equilibrium. The questions also enable in comprehending the fundamentals of econometric forecasting of data by making the readers understand about OLS estimates in a brief manner. In addition to this, it is also helping in giving a brief picture of the micro and macro-economic variables involved in the functioning of the South African economy. It reviewed deeply on the measures which ought to be taken to improve the economic condition of the country.

Mabasa, N. (2019, July 10). A basic income grant could be the key to uplifting millions out of poverty. Daily Maverick. https://www.dailymaverick.co.za/article/2019-07-10-a-basic-income-grant-could-be-the-key-touplifting-millions-out-of-poverty/ (accessed 25 July 2020).