It is very important to analyse the performance of the banks because it enables to check the financial soundness and make forecast about the future prospects of banks. There are three major parameters which describes the performance of the banks. They are: profitability, liquidity and productivity. Ratio analysis is considered optimal to compare bank groups on the basis of these three parameters. 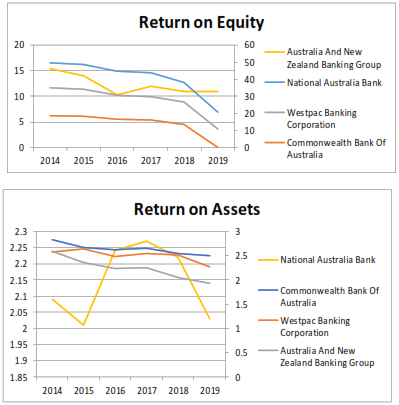 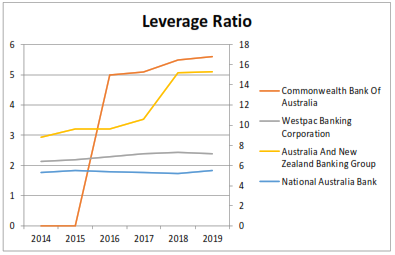 Here, the relative performance of the top four leading banks in Australia has been looked after. The banking sector in Australia is dominated by four major banks:

Three different performance ratios have been calculated for the last six years from 2014-2019.

One of the important ratio is return on assets which gives us information about the profitability of the bank. It shows how much income is generated from the assets of the bank. It is calculated as:

The second important ratio is return on equity which is also a measure of profitability. Its shows how efficiency the bank is generating income from the equity. It is calculated as:

Leverage ratio tells us the ability of the banks to meet its financial obligations. This leverage ratio is a measure which ensures that there is adequate capital in the banks. It is calculated as:

These all three ratios are very useful as they helps to compare against the peers.

The major uses of funds in these top four Australian banks are loans and advances, home mortgages, commercial loans, bank accepted bills, commercial bills, promissory notes, corporate bonds and debentures, interbank lending, securities including government securities, other bank securities, corporate bonds, securitised assets and foreign currency . With the help of the annual report, it can be said that the total funding has been increased by all the four banks.

The increased regulatory capital requirements by APRA and the weaker earning growth is imposing challenge for the majors in the banking sector. It is difficult for the top Australian banks in maintaining the shareholders expectations for high returns on equity.

The Commonwealth bank of Australia focuses on four key strategies to boost the business performance and growth (Common Wealth Bank of Australia, n.d.). They are customer service, business banking, technology and operational excellence and trust and team spirit.

With slowing revenue, decline in profits, increased regulatory costs and margin pressure, the results underscores a challenging environment of regulation and operation for the top four Australian banks. It is expected that when the banks will reshape their operations due to this challenge in new era of industry transformation, they will turn out to be more efficient and with more simpler and transparent business models.

One of the current non financial risk which affected the Australia’s banking sector is bushfire which started from September,2019. This fire had an adverse impact on the Australian economy. Many buildings, lands and houses were destroyed. There was a huge loss and destruction to family, businesses and property.

The other, very recent non financial risk faced by the Australian banks is the spread of deadly corona virus. This virus had an huge impact on the world. There is an increase in the credit losses. It is expected that the credit losses will increase by double due to this pandemic. S&P had forecasted that the Australian banks can absorb this increase in credit losses and the disruption caused in the funding process (Howden & Zammit, 2020). It is expected that the major Australia banks have the capacity to issue bonds in order to supplement their funding. The majors have a good level of liquidity in their balance sheets as compared to other banks in Australia.

The glance on the performance of the four major banks in Australia with the help of three important ratios helped us to analyse and compare them on the basis of profitability, productivity and liquidity. It is expected that with the challenge faced by the banks in the new era of technology will make them to grow more efficiently and with better business models.