Imagine that you meet with a small startup company that is in the early stages of their operations. Currently their architecture uses a LAMP stack (with MySQL), Apache and PHP all running on one desktop PC within their small office.

Like many small startups they are confident that they will be the next big thing and expect significant, rapid, yet un-quantified growth in the next few months. With this in mind, they would like you to architect their system and develop it in AWS.

Design and implement a scalable, elastic, highly available and fault tolerant architecture that allows the startup to grow organically. The architecture should specifically address the requirements/concerns listed in the description above.

AWS architecture solution for a start-up company which provides web-based services and hopes for a substantial expansion in future. The suggested architecture provides solutions using AWS and intrinsically facilitates various enterprise capabilities. In this solution, the system is divided amongst Network Tier, Web Tier, APP Tier and Data layer.

Benefit of AWS Services for A Start-Up Company?

As, there is a lot of risk associated with Startups and growth is not guaranteed, cost effective solutions are required. A re-sizeable solution should be provided to match the growth. Using AWS EC2, the servers can be added and removed as per the load on servers. AWS provides pay-as-you- go pricing model which keeps maintains the flexibility of investments.

If the enterprise is not scalable in terms of infrastructure to meet the unforeseen increase in the load at real time, web-based services suffer in terms of performance during peak loads. AutoScale provisioning of AWS EC2 instances helps in adding additional web servers when required for serving the increase in loads. The instances can be deallocated when the load returns to normal.

The business user’s data is crucial and should be protected from any unauthorized access, providing security becomes a necessity for any web service provider. With the help of AWS “Security Groups”, the access rules can be configured at each level of the system. In the provided architecture, at “Security Group: Web Servers” a rule that only https/http access to your web servers is defined which provides security in deployment. A similar abstraction can be used for the Database as well by using “Security Group: DB Access”.

Being a web service-based start-up, a company frequently required changed that need to be deployed in the system. The authorities may require changes at each level. The on-demand provisioning of various resources in AWS upgrades the turnaround time incurred in deploying and testing the changes at each stage such that a stable release of product is ensured in the production.

AWS Based Cloud Deployment Architecture for A Small Start-Up Company

The proposed Architecture solution is shown in Fig 1. The solution is divided among various layers at which a specific task and responsibility is managed. Such a classification will help the company in managing the security, access rights, and ownership of the works assigned to the staff as they grow organizationally. 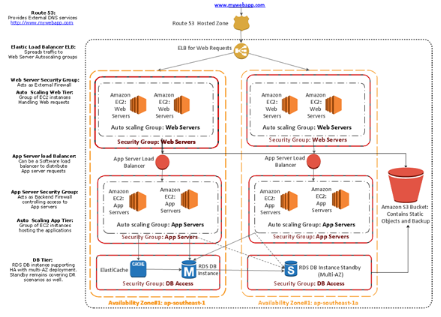 A virtual firewall is created by using a VPC security group. When an instance is launched, one or more security groups are associated with that instance. The rules can be added to every security group that allow traffic to or from its associated instances. Subnets are configured to route internet-bound traffic using the NAT Gateway so that resources in the Subnet can connect to the Internet. In the proposed solutions, two public subnets are created.

The other Key Components based on administration skill sets can be classified as:

a) It manages internal/ external network security and configurations:

CloudFront: To realize the global content publishing network, user requests will be directed to the node with the lowest delay to provide the best performance of the delivered content. It is necessary to set CloudFront to set the access source as the ELB node of the application.

a) Web Servers are managed using:

a) The App Servers are managed using:

b) Handles the Responsibility for maintaining and configuring the App server instances for managing the application requests.

b) Handles Responsibility for maintaining and configuring the backend database access, performance, security, backup and availability

The proposed architecture uses IAM to define different permissions of users, roles, and groups, and granting various permissions to different people for different resources. For example, for some users, full access to Amazon Elastic Compute Cloud (Amazon EC2), Amazon Simple Storage Service (Amazon S3), Amazon redshift, Amazon DynamoDB, and other AWS services is allowed. While for other users, the read-only access to some S3 buckets, or access to some EC2 instances, or access to the billing information without access to any other content is allowed only. In the provided architecture a single Key-Value pair is used for all the services.

AWS for The Start-Up Concerns

Following were the two concerns:

a) They would like the developed application to be able to scale up on dema With uncertainty around when and how much the demand would be, they are concerned about buying too much infrastructure too soon or not enough infrastructure.

Solution: EC2 can distribute traffic to multiple back-end application instances through elastic load balancing, and automatically expand according to the traffic load. It can also reduce the pressure of database reading by using elastic cache to cache application data. By providing read and write access separately, the data query can be flexibly extended to deal with the database load of a large number of read operations.

Solution: AWS adopt the Amazon EC2 instance recovery mechanism. If there is a problem with the instance, the replacement instance can be started quickly in a predictable way. Amazon RDS uses a highly available database composed of a primary database and a standby database. Usually, the standby instance is also stored in another availability zone. Amazon RDS will synchronously copy the data to the standby instance in another availability zone (AZ), and set the database snapshot at the same time. In addition, in case of hardware failure, Amazon RDS will automatically replace the computing instance used to support deployment. Amazon CloudWatch alerts can be used to monitor Amazon EC2 instances. If the instance is damaged due to an underlying hardware failure or problem that requires AWS participation to fix, the instance can be restored automatically. The system can monitor the server health by using CloudWatch to monitor the memory utilization, processor utilization, cache hit rate and other indicators of the whole system.