Table 1: Income comparison of communities living in Toronto and Georgetown

Population in density is one of the oldest social sciences that plays a crucial role in explaining the behavior of communities living in a certain location. Following research authors such as Holden (2017), basic theory holds that an increase in population densities increased stress on human needs. According to statistics Canada community profile population census, 2011 to 2016, Georgetown (my hometown) had a 4.8% population increase, while Toronto experienced a 5.5% population increase. In Georgetown, the population density per square kilometers is 1753.1, while in Toronto, it's 3028.2. According to age distribution, the largest population in Georgetown falls in 15 to 64 years (67.8%), and least falls above 85 years (1.7%), while in Toronto, the largest community falls in 15 to 64 years (69.1%) and the least fall in above 85years (2.0%). 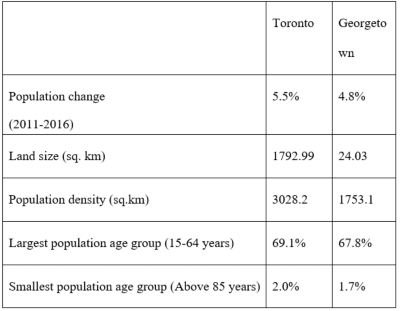 Samson, M. I. (2019). The Urban Metabolism of the Greater Toronto Area: A Study of Nitrogen and Phosphorus Fluxes across the Urban, Suburban, and Rural Continuum (Master's thesis, University of Waterloo).

Remember, at the center of any academic work, lies clarity and evidence. Should you need further assistance, do look up to our Statistics Assignment Help