To further determine and evaluate the consumer equilibrium, it is important to understand the concrete evidence as to how a consumer would be able to make chokes in between the two goods such as the good 1 and good 2 (Gavazza, 2018). Depending on the consumer's ability to decide and understand the pricing relation, it is important to judge the estimated prices such as goods 1 and 2 and having a fixed income or budget which would be related to the purchasing quantities of goods 1 and 2. Further, the consumer can purchase the quantities of goods 1 and 2 depending on their budget and the preferences as per the choices and the purchases (Li, 2018). It would be counted as the quantities that can be purchased and related to the good with the condition for consumer equilibrium, such as

1. The importance to minimize the impact of the costs and having a set of choices as per given output (Allevi, 2018)

2. To maximize the output with the given cost.

It is important to adopt the least-cost combination of factors and to anticipate how the firm can largely adopt the framework of the largest volume of output with relation to the cost and depending on the given level of output having a minimum cost. As identified how with the given choices it is important to denote the factors and how it would be combined in an optimum manner.

Cost-Minimization for a Given Output:

As per the theory of production, the producer's main motive is to understand the ways of the profit maximization firm, and how it would be estimated during the equilibrium stages. As the given cost-price function would be higher, it would be important to maximize the profits, and depending on the least cost combination factors, a choice can be made. Through the combination of output the main aim is to minimize the cost of production in relation to the given output. It would be a choice of the optimal combination for it (Aussel, 2017).

Further, the analysis would be based on the following assumptions:

1. It would be related to the choice of two factors, labor, and capital.

2. It can be anticipated with the combined factors of labor and capital determined to be homogeneous.

3. As per the prices of units of labor (w) and having a proper capital (r) it would be given and to be constant.

4. Having a concrete relation to the cost outlay to be given.

5. The firm being able to produce the product.

6. Depending on the price of the product that has been given and to be constant.

7. The firm desires to be profit maximized.

8. Understanding the perfect competition within the factor market. 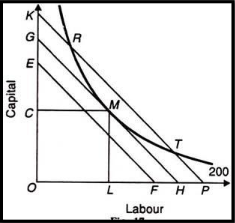 As understood from the above graph, how with the isoquant 200, on the point R or T, which is noted to be a higher is-cost line KP that can project the higher cost of production. From this graph, it has been noted how the is-cost line EF would show the lower cost but at the same time, the output 200 would not have attained it. Hence, the firm would adopt the minimum cost point M noted to be a least-cost factor combination that can produce the 200 units of output.

M would depict the optimal combination estimated by the firm. It is concluded to be a point of tangency that can be distinguished with the is-cost line tangent to the isoquant that can be a first-order condition that would not be necessary to the producer’s equilibrium.

The constant returns to scale identify when the production variables would be increased by the same some percentage level of input and it would produce the constant level of the proportion increase in output. For example, when there has been a 100% increase in the labor and the capital, it has resulted in the same 100% level of the output (Liberman, 2018).

As per the decreasing returns to scale it is identified as the production variables that can be increased at the certain percentage levels, but still be a less-than-proportional increase in output. For example, when there has been 100% of the labor and the capital increase, it has resulted in a 100% lower output.

In the company is a soap manufacturer which when doubles the total input then it is getting only a 60 present increase with the total output, then it would be called the decreasing returns to scale. Subsequently, if the manufacturer has doubled the output, with the same level of inputs, then it depicts then constant returns to scale. Lastly, when there is more increase in output in comparison to the proportion increase in production input then it is called the increasing returns to the scale (McKeown, 2018). 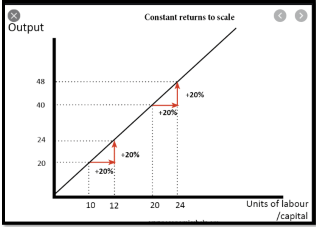 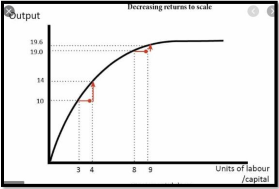 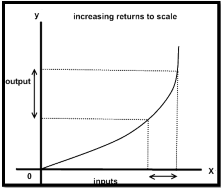 McKeown, R. (2017). Costs, size, and returns to scale among Canadian and US commercial banks (No. 1382). Queen's Economics Department Working Paper.