Survival for The Fittest

Predators and prays have learn to coexist over decades, with upcoming idea and technology such as the model we are able to analyze and find the best and suitable habitats and factors to consider to make sure both the pray and predator are still alive. For the case we are studying below we are assuming the predators and the pray are to coexist together in an environment no affected by their habitats. Ruther the availability of prey for predators and vegetation for pray, also the factors like speed, reproduction rate and death rates are monitored. Different aspect is to be adjust to get a suitable variable or data to be used in case the predators and prey have to coexist without extinction or total death. While dong so some factor is being monitored and realized how they affect the ecology of the predator pray model.

Predator pray models are the foundation of bio and ecosystems as evolution takes its course during adaptation as they leave in same habitat. Different species diversify and compete in same ecosystem for their survival, in this case the rule of survival for the fittest is usually applied(10 Columbus crcle,1982). Determined by specific variable(figure) or settings of the model application, for this case they take form of predator and prey which is deeply discussed below. They are involved loss win system of interactions which is carefully monitored and can be put into practice in the real life ecosystem.BY examining seemingly competitive interactions, we often recognize that some of this relationships are disguise. (Hoppensteadt,2006).

Preys and predator have always been a contributor or adding factor to one another evolution. Therefore, traits that change or improves predator ability to search and hunt prey will be selected for them, while the traits for prey will likewise be chosen for them too (Huffaker,1958). Since the objectives of each trait are not compatible, and their coexistence of the selective pressure that defines the difference in population between the predator and prey. By predicting their expected results, the relationship between the two important for biologists to interpret the structure and sustenance of a community 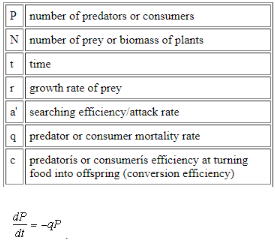 By making the prey absent we look at the behavior and population change of the predator. By multiplying the predators to their mortality rate to show the rate at which the population of predators decrease against a given time(duration). However, with availability of prey declines due to predator’s reproduction rate. This is consumption rate is obtained through multiplying the number off predators and the number of prays and the reproduction rate of predators.

In case the predator presence the resulting decrease in the population of prey. The above consumption rate describes prey mortality and its population can be denoted by the equation below.

By multiplying the search distance/ attack rate and number of predator the response to predator behavioral response/ rate of prey capture as a function of prey. some of this show how losses from prey population course of product of prey and predator abundance ( Brauer, 2000).

It switches no reasonable doubt that both populations showed cyclical behavior, the prey population generally tracked the downs while the predator tracked the peaks in population. However, some experimental requirements are needed to conclude the results, in order to show the results truly supports the predictions. To achieve this in the graph so that we consider the complexity of the environment. Food to be feed to the prey is assumed to be abundant. the prey capability to disperse was invoked by the existence of no stick together rule by the software. In other words, predator and prey will not meet one another spontaneously/randomly in the field.

In conclusion a model such as this should be simple enough to be mathematically tractable, but sophisticated enough to show how a system is realistic. With reliance of statistics assumptions this models have limited some of the behavioral activity which are applicable in real life such as by assuming that no predator can consume infinite amount of prey. Many other explanations have been used to show examples in the laboratory or observed between predator and prey population, but in general they are better fit by models incorporating terms use in representing capacity (the maximum population size of an environment to use as habitat.) for prey population, realistic functional response (how the prey density change affects predator consumption) for the predator population complexity in the environment.

Remember, at the center of any academic work, lies clarity and evidence. Should you need further assistance, do look up to our Ecology Assignment Help