Initially, obesity is defined as a problem which has severe implications on the health of a person. Such health implications cannot be denied, but if not controlled among its population, a country may begin to face economic implications of its population being obese. Depending on the body mass index (BMI) of a person, obesity is calculated by weight of a person in proportion to the height. It is excess accumulation of body fat due to deposit of more calories than the body can use. World Health Organization (WHO) declared obesity an epidemic in 2016 when its reports declared that around 1.9 billion adults (age 18 or older) around the world were overweight, out of which, around 650 million around the world were obese. (Matos, Mesenburg & Victora. 2019) Astoundingly, that represents around thirteen percent of the world's population.

The economic cost of obesity that the country faces can be manifolds. It has now become one of the most expensive man-made troubles. It heavily puts a negative effect on the cost of the country’s healthcare systems as the increased cost of procedures covered by the government programs, decreased productivity of the individual and then the premature deaths adversely affects the economy and its GDP.

The large number of Australians dealing with the problem of obesity has led the Australian government incur heavy costs on the healthcare programs. Cardiovascular diseases, endocrine disorders, cancer, and musculoskeletal conditions are the most prevalent health issues that are directly caused due to obesity. In 2015, the data of Australian Institute of Health and Welfare published that around 8.4% of the fiscal burden on healthcare was directly attributed to obesity. (AIHW, Australian Gov. 2018) During the same period, the National Health and Medical Research Council noted that the most efficient way of dealing with the issue of obesity on an immediate basis of intervention is surgery.

It can be seen from the above table how the increasing obesity is effecting, Medicare (a private health insurance) covers the cost of this surgery. But the requirements set by them for this surgery is extremely strict and the exceedingly small chunk of the obese population meets them. So, the proportion of people with the issue of obesity that get an access to Medicare coverage is extremely limited. This has put additional costs on public funding to cover the additional costs of healthcare for people dealing with obesity. (NHMRC, Australian Gov. 2019) 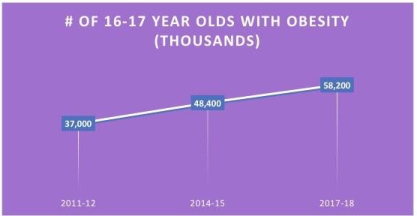 Image – The rate of obesity is increasing among Adult children

The basic argument for such policy change is simple, the opportunity cost of the surgery. The economic cost is being borne in any case whether the government funds these surgeries or not. The healthcare costs on subsidiary problems of obesity like cardio-vascular diseases, endocranial diseases, etc. are already implementing a burden on the fiscal budget. Depending upon this fact, the detailed analysis must be done focusing what would cost more to the government? To keep bearing these costs or to fund the weight loss surgeries? The detailed analysis of such costs could justify this. But one also must remember that obesity is bound to rise by 2030, as per the recent surveys leading to increased cost of healthcare. So, it would be better if the government funds the surgeries now and issues new guidelines regarding the nutrition intake. 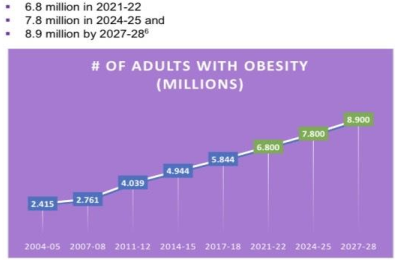 The high rate of obesity among the Australians has led to decline in the average life expectancy of its citizens by 2.7 years. This has also had severe economic impacts on the economy of Australia. Around 8.6% of the fiscal burden of the government goes into the health care expenditures related to the issues of overweight and obesity. This has also led to the decline in the output of labor markets of Australia, costing it around 371 thousand full-time workers per annum, in equivalence. All this combined, inequalities that the GDP of Australia is reduced by 3.1% due to issues of overweight and obesity. The government funding is received from taxations, so this issue also causes an increase in taxes by AUD 678 on each Australian per annum, to cover the costs of obesity. (OECD, 2019) 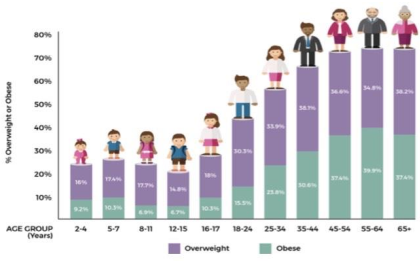 In this scenario of economic loss, the government intervention in the issue is highly justified. The issues of overweight and obesity are no more a personal or health issue only. Their serious implications as discussed above can lead to the heavy losses in the economic condition of the country. If the issue is not controlled in the due time and if the public is not made aware of the heavy implications, it is possible that the economic losses due to this reason may increase many folds over time. So, to spread awareness among the public, to introduce nutritional norms, to manage the health care budget, to control the fiscal burden due to obesity, and to introduce policies funding options so that the people currently dealing with obesity can have options, the government intervention in the issue seems appropriate.

The government can also introduce policies to relax the norms of Medicare cost for bariatric surgeries. Studies find that Australian healthcare services can be too complicated for an average Australian citizen to comply with them. If the norms by private insurance providers are eased, this would help the average citizen to reach out to the insurer and cover the rest of the cost himself. This could have a positive impact in case of equity, health, and welfare effects. The premiums of insurance are borne by citizens themselves; this would help the equity of government funds to be eased. The health impact would be greater too as less obesity would lead to less cardiovascular diseases and more labor productivity, which in turn would give rise to a better welfare effect. (Calder et al. 2019)

Issue of obesity and overweight has remained no more a personal or health issue. The problem has taken the globe in its grip and now the severe economic impacts have started to show up. Australia too is amongst one of the high-ranking countries in terms of obesity. The economic and fiscal impacts of this issue are visible on the healthcare budget of Australia too. It has now become a necessity for the Australian government to intervene and control the issue before it gets more destructive to the economy. Comparing the current losses, the government spends around 8% of healthcare budget on obesity related issues, and combining the losses in labor productivity, cardiovascular disease, etc. the issue of obesity is leading to a loss of about 3% of GDP of Australian government.

The government intervention to tackle this issue nationwide, introduce policies, easing the norms of private insurance for weight loss surgeries, etc. have become a necessary step to control the rising issue.

Department of Health, Australian Government, 2019. Overweight and Obesity. Retrieved from: https://www1.health.gov.au/internet/main/publishing.nsf/Content/Overweight-and-Obesity [Retrieved on: 28-05-2020]

OECD, 2019. The Heavy Burden of Obesity. Retrieved from: https://www.oecd.org/australia/Heavy-burden-of-obesity-Media-country-note-AUSTRALIA.pdf [Retrieved on: 28-05-2020]