The life expectancy of New Zealand versus other countries

Employment as well as community involvement

Comparison between the reports

The global strategy and action plan on ageing and health

Well-being and health are not only determined by our characteristics and genes but also by the condition or environment wherein we are born and survive all through the life course (Steels, 2015). Therefore, the environment plays a significant role in shaping how people age and respond to any disease, failure of function or any other adversity experienced by us at several phases of life and in later years. However, responding and reacting towards ageing of the population is considered to be the biggest policy challenges which are being faced by society during the 21st century (Beard & Montawi, 2015).

New Zealand is one of those countries that has been ranked at the top among a handful of nations for overall health and wellbeing and comfort of older people as per robust global comparisons. Moreover, it is the country consisting of faster population rate ageing as compared to any other nation.

In the year, it was reported by Statistics New Zealand that the gap between the life expectancy of Maori and Non-Maori at birth was lessened to 7.1 years. The Maori female babies were projected to live up to 77.1 years as compared to Maori male children which were 83.9 years along with non-Maori males estimated up to 80.3 years (McLachlan, E., 2018).

The Life Expectancy of New Zealand versus Other Countries

According to the reports of World Bank, New Zealand has the life expectancy similar to few developed nations and is, in fact, more than the countries such as the United Kingdom as well as the United States and even more so. A little ahead of the country, the data of the World Bank reflect the life expectancy of Japan as 83.84 years in the year 2015, the United Kingdom was 81.62 and Australia was 82.45. However, the United States constituted only 78.74 years in the year 2015 (McLachlan, 2018).

To offer some perspective, the global life expectancy was recorded by World Bank in the year 2015 at 71.4 years for males and females it was 73.8 years. The data showed that the females live longer as compared to males across the world having the gap between both the sexes to be left at consistently 4.5 years between the years 1990 and 2015. Furthermore, New Zealand has seen a marked augmentation in how the people of the country are likely to live ever since the 1970s. For a few countries, life expectancy has enhanced by extra 20 years for four decades whereas countries like Russia have experienced almost the same life expectancy. 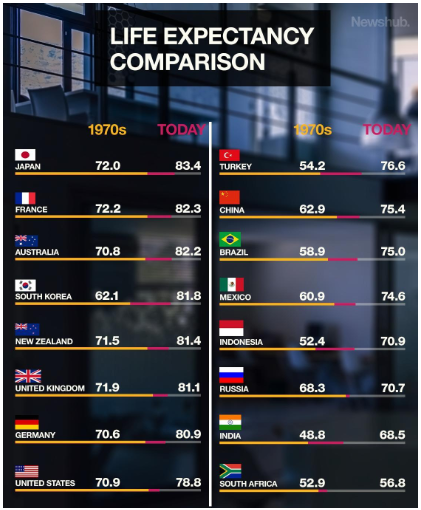 From the figure above, it can be said that the countries who have tremendously improved their economies ever since the 1970s like South Korea, India and Turkey, have witnessed a remarkable rise in life expectancy.

During 1970s India merely has a life expectancy of 48.8 years but at present, the people of the country, the second most populated country in the world, could be expected to live until they turn 70. Apart from India, countries like the UK, New Zealand and Japan have all witnessed a rise of approximately 10 years since the time of 1970s and this, further associates with the longer span of life because of the advancements made in the healthcare sector along with the declining in the smoking rates. Moreover, countries like South Africa and Russia have witnessed stagnated life expectancy by remaining low over the last four decades (Wright, 2017).

According to the UN Human Development Report for the year, 2019 rankings have been provided for the countries in the top 10 position in terms of highest life expectancy rate (Chamberlain, 2020).

Out of the top 10 nations, four countries belonged to Europe as well as four from Asia. The highest-ranking nation is Canada in North America which is at 14th position. Costa Rica was the next North American country ranking at 31, followed by the United States at 35. The only Middle Eastern nation in the ranking of top 20 was Israel while Lebanon ranked 35 among the next closest regional nation (Chamberlain, L., 2020).

New Zealand comprises of a higher percentage of public transfers as a means for income for the citizens of older ager as compared to other nations. This accentuates that New Zealand is playing an incredible role in the maintenance of income for older citizens. However, weaknesses could be witnessed in global comparison which signifies that future income securities of these older adults are under pressure in the country. Moreover, there has been a sharp decline in older people's income over 75 years in comparison to other nations.

In New Zealand, health expenditure in terms of GDP share and its growth rate is considered to be relatively high. The key challenge is how to manage this growth which is driven usually by residual cost such as prices, technology and institutions instead of demand growth and demographic. Moreover, New Zealand comprises of a real health issue of obesity in the older people which is higher than the countries like Sweden, Canada and Japan (Mitrou et al., 2014).

New Zealand has comparatively policies for age-friendly tertiary education than other nations. However, recently access to allowances to the students has been removed for over 65s which tend to diminish the benefits somewhat.

Numerous age-friendly initiatives are taking place within the communities across the globe. Some of the recommendations for refining the life expectancy of older people in New Zealand have mentioned below:

The accessibility of proper medical care tends to have an instantaneous impact on the mortality of older age and this could be seen in the unification of Germany in which a deteriorating healthcare system was instantly changed by an extremely improved medical care system. Moreover, there has been an outstanding improvement since the 1960s in the therapies targeting older aged people (Huang et al. 2011).

Social participation involves older people interacting with their family members and friends along with the people within the broader community wherein they reside. This can be useful in achieving various aims of age-friendly such as active aging, falls prevention, forging for friendships and social inclusion (Emlet & Moceri, 2012).

Employment as well as community involvement

With the ageing population along with the ageing workforce, the older adults have a priceless contribution to make. The older people must be recognized for their productivity within the workplace and also must be actively engaged within the community via supporting local events, volunteering and participating in the local politics (Jeste et al. 2016).

Comparison Between the Reports

The vision of Healthy Ageing Strategy is based on “older people live well, age well and lead a respectful and of life in age-friendly communities”. It mentions that it requires a life-course method seeking to increase health as well as the well-being of the old aged people.

The framework of the strategy is established in which funding, policies, service delivery and planning concerning age-friendly environment: (Associate Minister of Health, 2016).

The Global Strategy and Action Plan on Ageing and Health

The strategy establishes five major objectives that mainly involve a call for the nations for committing to action, to create age-friendly environments, to associates health systems to the demands of the older population and to establish sustainable as well as equitable systems for long-term care (World Health Organization, 2017).

The age-friendly environment helps foster the Healthy ageing by supporting the establishment and preservation of intrinsic capacity all through the life and by facilitating the superior functional ability for making people do things they give importance to.

With the coordination of age-friendly actions all through the various sectors as well as levels, it can result in the improvement in different regions of the functional ability which may include the abilities to fulfil the basic needs.

Facilitating age-friendly environment is considered as the most effectual approaches to respond to the demographic ageing along with enhancing Healthy Life Year indicator. The age-friendly environment helps in empowering the older people to get aged inappropriate physical a mental health, facilitate the active participation and social inclusion and assist them to uphold their autonomy along with a better quality of life at their old age (Cramm et al., 2018).

The old aged people may have to face negative outlook as well as inequity based on age. With the establishment of age-friendly environment, certain aspects could be addressed such as diversity, fighting against ageism and ensuring everyone gets the chance of participating.

The environment of age-friendly can reduce the peril of falls and also helps in the prevention of neglect and abuse of susceptible old people by enhancing the safety of the built environment along with the protection and security of the older people within the community.

This report explores the aspects and role of age-friendly environment in support of healthy ageing and rise in the life expectancy in New Zealand. Environments are considered to be the most significant determinants of the way of functional ability and intrinsic capacity over an individual’s life course as well as into his older age. Moreover, there are many spheres of functional ability and specifically significant in later life. The report reviewed the life expectancy of New Zealand and compared it with other nations with significantly higher life expectancy. With the rationale provided through the two different reports, it has been explicit that environments have a crucial role in the determination of our mental and physical capacity across one’s life course and hence communities and cities across the globe are putting efforts in becoming age-friendly.