1. The research question of the study is to find out the acute impact of Electronic Storm. The study will also focus on identifying the factors associated with increased morality and virtuous treatments used for treating patients that suffered from Electrical storm (Prabhu et al., 2015).

2. In order to identify the acute impact of Electronic storm, the research design of an observational study was adopted. In this observational study, the patients of electric storm that were admitted at Sree Chitra Tirunal Institute for Medical Services between 1/1/2007 and 31/12/2013 were used as a sample to conduct the observational study.

3. The alternate study design can be adopted in the current study is Comparative Research Design. In this research design, the population can be divided into two groups in order to compare the impact of intervention on two groups. In the research design adopted in the study conducted by Prabhu et al.(2013), the researcher has excluded the patients within the one week of Electronic storm.

In the comparative research design, one group can consist of the patients within one week of Electronic storm suffering. The other group will be consisting the patients after the one week of Electronic storm suffering. In this way the effectiveness of treatment and judgement can be evaluated on the patients of electronic storm within the first week of suffering in comparison to the treatment that takes place after one week. Therefore, it can be evaluated that the adoption of comparative research design can further increase the usefulness of the study and quality of the findings of the research findings.

4. a) The primary outcome of research study is Acute Outcome of treatment of patients.

b) The Acute Outcome of treatment of patients is used as a dependent variable in the analysis in the current research study.

5. a) The exposure variable is Electronic Storm in the current research study.

b) The exposure variable is utilized as an independent variable in the current research study.

1. Acute outcome in terms of morality and survival ratio has been used as a measure of association between the exposure and primary variable in order to analyse the impact of Electronic shock.

A sample of 36 patients was selected in order to conduct the analysis and find out the mortality indicators. Out of 36, it was found out that 14.63% of the patients were dealing with ACS. Therefore, it could be evaluated that the ACS was one of the common triggers of Electronic Storm. 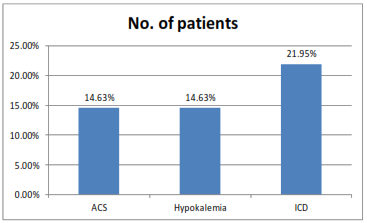 5. The aim of the study was to evaluate the acute outcome of the Electronic storm, treatment modalities used and the factors of morality. The association between Electronic storm and morality ratio has been depicted by the author in the research study. The findings also displayed the different triggers and differences in the morality rates among the patients on the basis of different health factors. I would have not presented the data results in this manner because there are various diseases that the individuals in sample selected are dealing with. Along with this, different therapeutic methods were used with the patients in the single sample. Therefore, it may become difficult to reject or accept the hypothesis because the heterogeneous nature of the sample.

H0: There is significant relationship between Electronic Storm and increased morality.

HA:  There does not exist significant relationship between Electronic Storm and increased morality.