It is considered to be the visual organiser that is utilized to improve understanding regarding the topic and it can be utilized in teaching, research and practise in a different setting (Conceição et al., 2017). The subject that is utilized for the study is the Impact of History and Colonisation from the First Peoples Health and Practice course 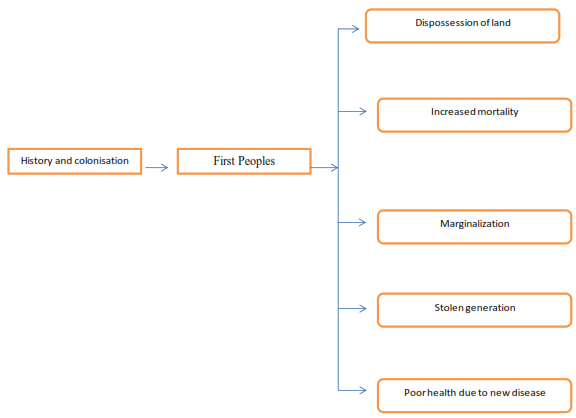 Critical reflection is the process that identifies the assumption concerning the topic that is framed due to the social world and impact over the individuals (Whitaker & Reimer, 2017). The critical reflective is going to discuss the drastic impact of the colonization over the First people and it also discusses my learning experience after the course.

The ‘Impact of History and Colonisation’ subject directly linked the different aspect of the colonization and history impact over the First people and it also identifies some factor that directly leads to deteriorated quality of life of the people. The history and colonisation not only impacted over the one aspect it has direct influence different aspect that leads to a decrease in mental and physical wellbeing. The first factor that directly affected the first people in the broader social factor that includes history, unemployment, deteriorated cultural practise, decrease financial resources and poor housing. The second set of factor includes a casual social connection that includes distrust, miscommunication due to language barrier and negative mental state.

Intimate social connection is another aspect that includes family obligation, pressure and decreased guidance. Some personal factors are also included hopelessness, health risk, poor coping mechanism and increased mortality rate (Waterworth et al., 2015). Many issues are faced by the First people due to poor history and colonization that has increased the complication of the individual. The colonization has led to war, displacement, forced labour, removal of children from friends, relocation, ecological destruction, the unintentional spread of disease, banning indigenous language, regulation of marriage and eradication of the social, cultural and spiritual practice of first people (Paradies, 2016). One of the major impacts of the colonization is the dispossession that directly deprived the First people of their land and they are forced for the relocation. First people considered land to be one of the important aspects concerning their cultural and traditional belief and dispossession has directly impacted the mental status of the individual (Nursey-Bray & Palmer, 2018).

The colonization also increased the mortality rate among the First people as they were treated badly and have decreased accessibility toward proper health service. The poor history and colonization have directly impacted over the mental and physical wellbeing that directly increased the death rate and reduce their population that also increases their complication (Broe & Radford, 2018). Marginalization is another factor that as lead to discrimination for the first people that directly decrease the political, social and economic power of the individual. The marginalization leads to depriving rights for ancestor land, broken family and reduce accessibility to different resources (Mazel, 2018). One of the impacts of history and colonization is the stolen generation that is the group of the children that are separated from their family and forced to adopt the different cultural practice. The separation of the family lead to a negative impact over the children as well as parents and this incident occurred in 1910 and 1970. The government policies are utilized to separate the children from their family and they were treated badly that has directly deteriorated their mental wellbeing (The Lancet Public Health, 2018).

One of the major impacts over history and colonization is over the deteriorated health status of the first people. The colonization leads to an introduction to the new epidemic diseases which are new for the First people and they are not immunized for that. The increased pressure leads to poor housing condition, poor hygiene that directly increased risk for the infectious disease and poor nutrition also leads to increased risk for non-infectious diseases. The decreased health care services increase the complication as they were unaware of the disease that directly decreased their health status (Lai et al., 2018). The health statuses of the First people were deteriorated due to drastic history as it involved the irrelevant behaviour of the colonization. The first people have faced discrimination in health care that has increased the disparity to acquire the health care facility which is the leading cause of deteriorated health.

This course has made me realised that how painful changes have been encountered by the First people and they are marginalised just because they long to different cultures that directly deteriorated not only their health but their educational and economic background also. Every individual has an equal right to access health care facility and get the beast assistant but they were deprived of all the different facility that are necessary to sustain. The increased vulnerability leads to two consequences either the First people have died due to major illness or they have encountered the lifetime disorder that directly deteriorated their health status (Juan et al., 2016). The introduction toward the suffering of the First people makes me realise how discrimination and racism can deteriorate the lifestyle of the individual that has a direct relation to increasing the mortality rate

The poor health of the First people is directly associated with deprived of proper housing that directly increases their risk for infectious disease due to poor surrounding environment. The increased health complication has directly impacted over the wellbeing of the individual and deteriorated health facility is also one of the major that has contributed to the decreased health status. I feel sad that how health care facility can be involved in discrimination as they are expected to provide equal care to every individual. The deteriorated health care facility has directly impacted the health as lower education and decreases understanding toward disease lead to increase complication (Durey et al., 2016).

After going through the course I have realised that hoe important to utilize the cultural competent skill during the care that helps to provide the equal facility to First people and reduced the chances of complication. The holistic approach can help to improve the health status of the First people and providing equity in the health care help to improve health care setting. The knowledge that I have gained during the course I can utilize it to improve the clinical skill that will help me to improve the clinical practice concerning the First People.

There are different factor that leads to the poor health status of the First people by increasing complication of the individual. The first factor includes poor environmental condition as they are considered to live in overcrowded households that have a structural issue that directly increases the risk for infectious diseases. The decreased housing facility also increases their vulnerability to manage in poor housing condition that leads to deteriorated health. The next aspect includes the inadequacy of the nutrition that is directly related to disturbed metabolism and increased risk for non-infectious diseases. The decrease accessibility toward proper food as increased the chances for the First people to run about of the food that led to adequate nutrition intake.

The decreased physical activity due to poor physical and mental health status is also one of the reasons that lead to deteriorated health status. Increased body weight leads to obesity that is also one of the major issues in the First people and it also increases the risk for the metabolic disorder in an individual. The improper and decreased accessibility in health care setting lead to decrease immunization which is considered to be one of the major risk factors for the infectious decease. These factors have directly impacted the deteriorated mental and physical wellbeing of the individual (Lee & Ride, 2018). The impact of the history and colonisation over the health status of the First people was not known and this course has helped me to link different aspect related to history and colonization that has contributed to deteriorated health of the First people.

Remember, at the center of any academic work, lies clarity and evidence. Should you need further assistance, do look up to our Public Health Assignment Help