This study is undertaken to determine the overall risk of fire hazard on the threatened species named Eastern Barred Bandicoot, Perameles gunnii. This species is native to south Australia. Over the last few decades, their population has been experiencing a steady decline owing to factors such as habitat loss and introduction of non-native feral species such as cats and red foxes. Our study considers environmental factors, adaptive capacity parameters and population exposure of the species towards fire hazard. The objective of the study is to determine spatially the vulnerable zones and to provide guidelines for future environmental policy making that will help conserve the threatened species on the eve of any wildfire/bush fire incidents which is major force of destruction of flora and fauna in parts of Australia.

The methodology uses GIS and Raster data processing techniques to create layer wise parameters comparable on a common scale. The study further assigns variable weights to each of these parameters depending on existing knowledge and risk factors to determine the output. The study also generates cost surface layer to connect two major core homing ranges of the species under study to generate a wildlife corridor.

Some of the information layers used to complete the study are as follows:

Proximity analysis, rasterization, vectorization, reclassification, least cost path analysis was some of the methods which were used extensively to generate the output.

The final output was generated using a multi-criteria analysis. The equation and the respective weights assigned to the variables are as follows:

The resultant output was summarized within hexagonal grids which are 12km by 12km wide. Though such practices reduce the micro level spatial accuracy of the information. But in case of environmental modeling, where terrestrial features and environmental features are involved, the accuracy does not suffer much owing to the large area of transition inhabited by the above features and hence their characteristics do not change radically within small distances. Hence, shortcomings in terms of spatial accuracy is not discussed in this study.

The result of the study highlights the vulnerability of the primary core homing ranges of the species which is in the areas adjoining the south east of Tasmania also known as Greater Hobart. The overall risk map plot looks very similar to the exposure map plot due to the high weightage assigned to the population exposure. This is done due to the already threatened status of the species and hence the remaining population requires dedicated efforts towards the species for their survival. The significant factors that imparts the vulnerability to the region are environmental factors such as high maximum temperature (climate change), high wind speed and vulnerable land cover. Since most of these factors are beyond human control, quick control and mitigation of fire during an onset is opined as a possible measure towards the protection of the threatened species.

The Eastern Barred Bandicoot is a small, yellowish-brown nocturnal marsupial. It was named after the pale bars present across its hindquarters. The mainland subspecies of Eastern Barred Bandicoot, Perameles gunnii, is listed as extinct in the world (Victoria State Government, 2019). At the time of European settlement, the Eastern Barred Bandicoot occurred from the far south-east of South Australia through near-coastal south-western Victoria to near Melbourne, across most of Tasmania (other than high altitude areas and the higher rainfall south-west and west of the island). There is no reliable estimate of the population size of the Tasmanian subspecies. However, it is undergoing substantial decline, with populations in the Midlands much reduced over the period from the 1950’s to the 1990’s (Driessen, et al., 1996). Various sources of literature have indicated over the past few years, that the population is on a consistent decline.

Significant part of the threat to the species has been attributed towards the loss of grassland habitat and predation by cats and foxes (Victoria State Government, 2019). Loss of habitat can be attributed to recent decline in rainfall in the region as well as increase in livestock animals and their resultant increase in foraging requirements.

While, it has been established, that loss of habitat is a primary cause of concern for the decline in population of the species under study, the recent wildfire has significantly increased the threat to the species owing to severe loss of habitat is a short period of time. This study lays emphasis on the wildfire hazard potential across Tasmania, and more specifically the prime habitats for the species under study. This type of investigation requires study of geography, or rather spatial study of population distribution, hazard potential based on climatic condition, topological characteristics and adaptive capacity of the region in terms of relevant infrastructure.

Our first objective towards successfully mapping the fire hazard in Tasmania for the Eastern Barred Bandicoot was marked by running a Kernel Density Estimation (KDE) technique on the Easter Barred Bandicoot geolocation samples. The method determines the density within each raster cell based on the number of sample (species) points in a location. The KDE requires a search distance parameter which was given as 12km while it also assumes a Gaussian distribution of the species. 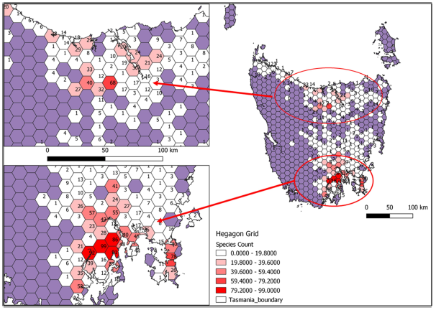 Two regions have been identified across Tasmania as the prime habitat for the Eastern Barred Bandicoot using the above Hexagonal Points in polygon analysis and KD Estimation. The regions are highlighted in the figure 1. The maximum species count found amongst the hexagonal cells is 99 which is located on the south eastern coast , also known as Hobart. Figure 2 displays the two core homing ranges and their surrounding ranges. The wildlife corridor essentially connects both the northern habitat and the south eastern habitat patches. The corridor was generated using a cost surface layer. The cost surface layer was developed using the following layers and associated weights:

Cost is given by the following equation,

Since habitat loss is the most significant factor for the rapid decline of the Eastern Barred Bandicoot, we have given it the maximum weightage while roads were given the least weightage. 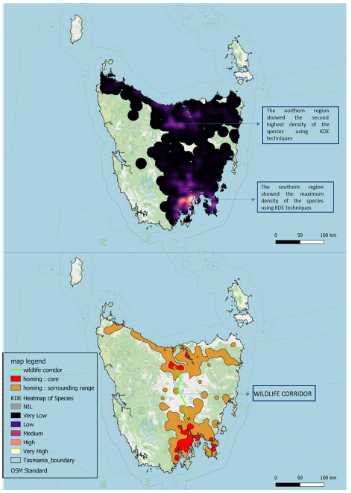 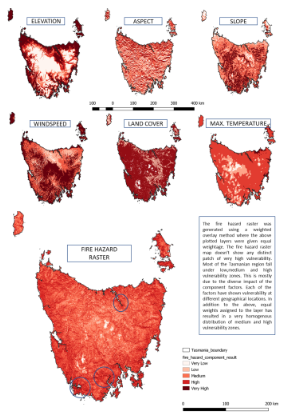 Figure 3: Fire hazard vulnerability map along with its component factors plotted on map 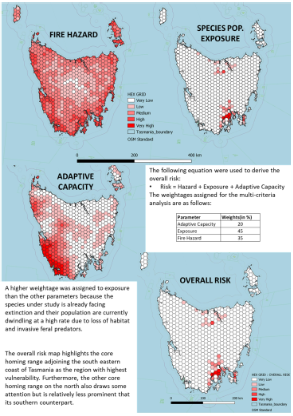 The overall environmental risk to our species under study, i.e. The Eastern Barred Bandicoot has been prominently detected in the region adjoining the south eastern cost of Tasmania as shown in figure:4. Notably, the above mentioned region is previously identified as core homing range of the species.

The regions surrounding Hobart is a part of the primary core homing range of the The Eastern Barred Bandicoot. Notably, the same region also experiences very high temperature almost every year. Last year, in the month of December (2019) bushfires broke out starting from Pelham to Forcett and alerts were given out for the region of Greater Hobart. This comes with the backdrop of the more widely known 2012-2013 Tasmanian bushfires which caused havoc and lot of damages in South eastern regions of Tasmania including Greater Hobart region (The Examiner News, 2013). It is impertinent to say, that, efforts are required to be focused around the Hobart region to save the quickly dwindling species from bush fire havocs. With global climate change, increasing temperatures have become a norm around the globe.

Increasing temperatures around Hobart, where maximum temperatures are already crossing 40 Celsius frequently during summers, further increases the chances of future bush fires and, hence threatening the near extinct population of the Eastern Barred Bandicoot. Also, due to its urbanized nature, the region has a very high adaptive capacity owing to multiple water hydrant station and fire fighting stations in the proximity. Technological solutions using IoT could significantly reduce reaction times whenever smoke is detected and prevent major damages to both flora and fauna and human lives and property.

The study undertaken, here, highlights the threats faced by the The Eastern Barred Bandicoot around the south eastern region of Tasmania. The significant risk factors involved include increasing maximum temperatures due to climate change, high windspeed and vulnerable land cover combined with core homing ranges of our species under study. Much of the above factors are beyond the control of humans and hence preventive measures against bush fires can only be successful to a limited extent. It is thereby recommended, that, efforts should be focused towards mitigation of the risk and control of bushfires whenever it occurs. Some of the measures are as follows:

Remember, at the center of any academic work, lies clarity and evidence. Should you need further assistance, do look up to our Geography Assignment Help