The grandmother was instrumental in informing the caseworker that she feels psychologically depressed. At the same time concerned about the children’s primary care as they have a working mother who tends to remain unavailable to them. She is in need of a housing solution as she is fed up with her abusive husband and wants to get divorced or leave him after staying for 11 years with him. This is the main fact for her to remain worried about her children.

The grandmother is a 56-year-old lady. She has a daughter and two grandchildren. She is depressed as well as unemployed and has to live in a car for two long weeks with her grandchildren in their support. Due to the abusive nature of her husband she gets has a developed worry in regards to her children.

The grandmother has two grandchildren. One is aged 9 years and another is for five years. Besides appearing anxious the contextual girl child is grossly observed to be underweight, as well as timid. Due to the abusive nature of her husband she wants to leave her husband hence at times get highly worried about the future of her children. As the children don’t listen to her and are growing uncontrollable by getting rowdy she says that their father at times shows up but is of no use as he is just a useless drunk.

The age of the grandmother is 56 years she has two grandchildren who arrive at the service stating that for the last two weeks she has been living in her car. She seems to be a bit depressed as well as concerned with the primary care of the children due to the unavailability of their mother who is a working woman. As per her statement, she is instrumental in requesting housing along with necessary groceries. It is due to the fact that she wants to get away from her abusive husband which in turn makes her worry about her children’s future.

Any other important information

Cut marks or bruises can be seen visibly on her body as well as that of her older grandchild as the grandmother was hesitating to tell any more details. She says she is unable in controlling her grandchildren as they pay no heed or listen to her anymore in recent times. Hence these mentioned circumstanced forced her to work and unwillingly getting confused as she is unsure of the starting point.

Assessment of the Risk 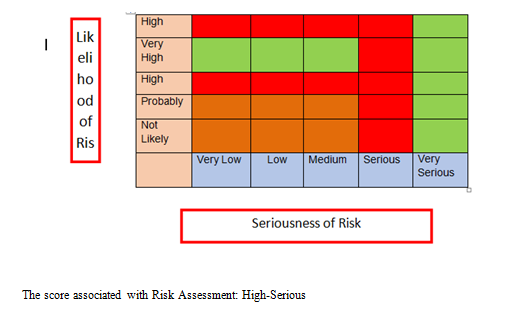 The grandmother informed the social worker that she was depressed and would like to leave her abusive husband. From the given topic it at the same time was confirmed that the grandmother was highly concerned for the safety of her grandchildren. Although she did not or incorrect terminology was hesitating while giving responses but her bruises were visible on the bodies of both grandmother and grandson. The granddaughter appears to be underweight, shy, and anxious and does not respond to me.

Information about the score

The accessed score in this regard is high-serious. It is because the grandmother is suffering from depression and her husband is also abusive. Depression is a mental condition that causes significant impairment in the daily life of people (World Health Organization(2017). The possible causes in context to depression subjects psychological, biological, and social sources of distress. In this case, the cause of distress for the grandmother is her abusive husband. There are bruises on the face of the grandmother and also the older son. The children have also become rowdy and do not listen to her anymore. Their father is a useless drunk and only shows p sometimes.

Find housing for grandma/grandchildren: finding proper housing for the grandmother and children are very important in this case as they have managed to spend some moments of their striving life inside of a car for 2 weeks. This has left them feeling more depressed and anxious.

A referral to doctors for depression: her depression is getting very serious and in these circumstances, it is very vital that she goes to a healthcare professional or an expert for her depression and overall health. 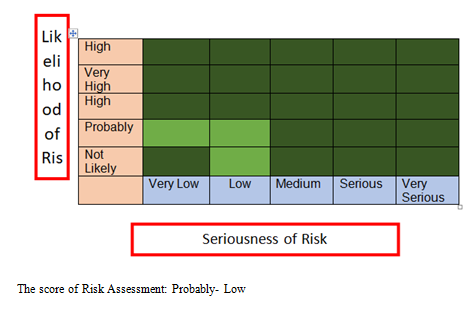 The score is low in this context as the safety goals refereed earlier was very significant. The grandmother and the children are better as they have started to live in a free environment without her abusive husband. The children are happy and playful. Education about domestic violence and abusive behavior had made the grandmother strong enough to deal with him. Proper housing had made them stable. The healthcare expert had given canceling and medications for her condition which as changed her mental health for the good (Wakefield et al. 2017) 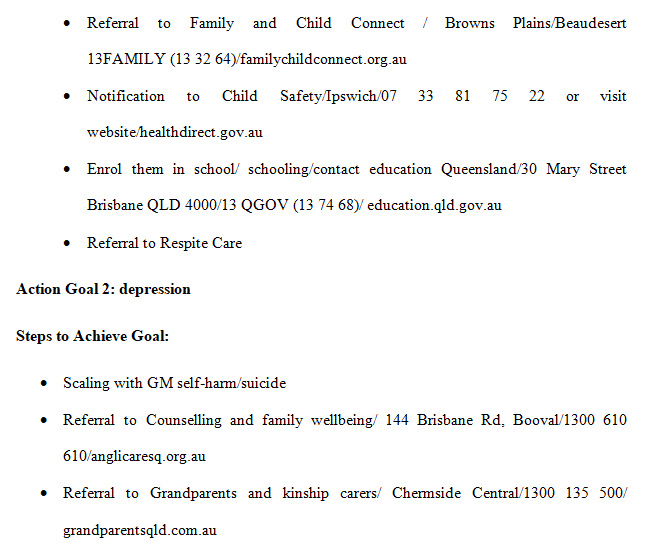 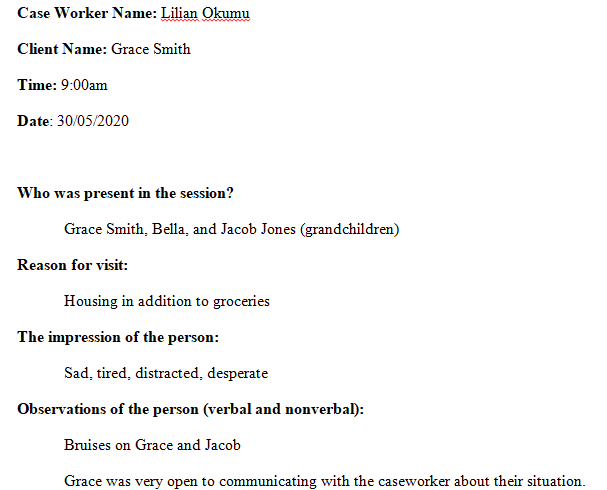 The process that have been used in context too this particular case study is based on strategic decision making.

Autonomy through education in this context means to provide education about a certain aspect which can make someone take their own decisions in future.

Client centred approach means that whatever is thought of about the client is for their good and wellbeing and keeping in mind their primary concerns.

The principles were selected keeping in mind the condition of the grandmother and the children. Strategic decision making has been entailed by the case worker to understand the situation of the grandmother. Education was provided to her so that she can take decision about her abusive and violent husband. The whole process was initiated so that she could live her life freely with the children towards a better future (Cohen & DeRubeis, 2018)

Depression, bad mental health, abusive relationship was a pertinent risk factor in this regard.

The solution that was imparted in this context was to ensure the best interest of the grandmother and the children.  The solution provided entailed that the children required going to respite once or twice a week, to find proper housing for grandma and the children, educating grandma bout domestic violence and abusive behaviour and a referral to doctors for depression.

The goals were set to make grandma independent and start over again with her life. Since she was depressed, did not have  a proper house, it was very important to deal with those situations. She was convinced that housing will solve most of her problems. Going to a medical professional will be very helpful to deal with her mental health condition and overall health in general