In order to research about customer satisfaction on new cement product manufactured by the company and sold across Sydney, Brisbane, Canberra and Melbourne, descriptive statistical method will provide relevant results. 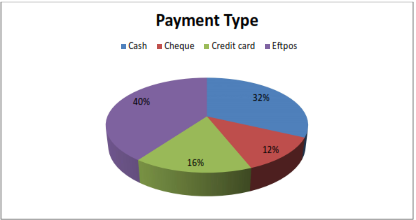 The payment type analysed via pie chart demonstration, from the 50 receipts collected shows that a greater number of customers favour Eftpos over rest of the payment options.  There are only 32% customers who prefer to make cash payments while least percentage of customers has used cheques for completing the transaction. With this pie chart interpretation, it is indicated that customers in Australia are highly inclined towards using electronic means of payment and are regular users of credit and debit cards for transacting generally. The cash payments have not lost their utility entirely across Australian cities but as far as primary preference is concerned, electronic funds transfer is widely preferred.

The bar chart displayed in figure 2 reveals the frequency of customers belonging to the chosen four cities of Australia. It is observed that the majority of customers come from Sydney followed by Melbourne. The lowest number of customers are from Canberra the capital city but when observed from inter group variations, there are minor differences which makes the selected sample of respondents for this research as homogenous. It also gives an impression that highest number of buyers for product of Au Cement come from Sydney that indicates the popularity of this new product variety in the city to be most in comparison to the rest of the cities of Brisbane, Canberra and Melbourne. 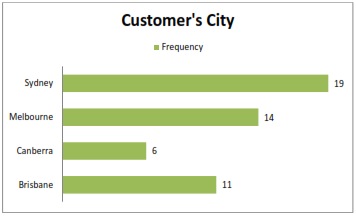 With reference to figure 4, relationship between customer satisfaction and sale price is observed with several peaks in the graph and no definite trend. This leads to the inference that there is clear association between the price of new product and customer satisfaction. It further implies that the company does not need to focus on any particular pricing strategies in relation to launching of this new product in the market as any direct impact of former on the customer’s satisfaction level is not evident. For instance, the highest satisfaction score of 10 is observed at a price of 435 $/ton which is a very high price so it is takes to the consideration that customers across the chosen Australian cities might decipher higher priced product with a mark of quality and therefore multiple peaks for satisfaction scores can be seen as the sale price increases. However, the lowest satisfaction score of “1” is given by a customer for a sale price of 374 $/ton which leads to the conclusion that there are reasons apart from seemingly relevant association of price and customer satisfaction.

The table displayed below shows the mean sale price for new cement product as 356.74 $/ton and wide differences between the values of central tendency measures namely, mean, median and mode suggest the distribution of data is asymmetrical (LeBlanc 2004). The standards deviation of 38.59 explains the degree of variability within the data while the skewness value within -1 to 1 implies that data is not highly skewed. The maximum sale price is recorded to be 469 $/ton while its lowest value is seen as 297 $/ton.

The performance on the basis of response time target for Ambulance Victoria is evaluated with the help of descriptive statistical analysis from the secondary information collected during the third quarter for 2015-2016 (Data Vic 2016). 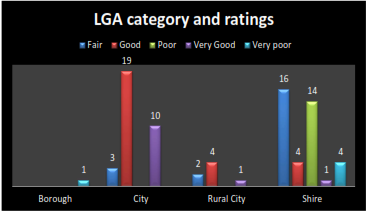 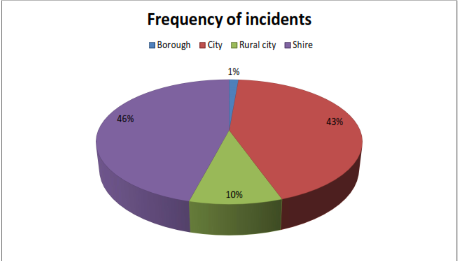 The pie chart displayed in figure 6 demonstrates the frequency of incidents that have occurred which is an important information for Ambulance Victoria to curate its services accordingly. Based on the pie chart, Shire tops in number of incidents with 46% of total incidents belonging to this area followed by city while Borough stands on the last position. It is inferred from this demonstration that Shire and city areas will most likely present greater rate of demand for the ambulance services and accordingly, Ambulance Victoria must ensure the service availability for the emergency in future. 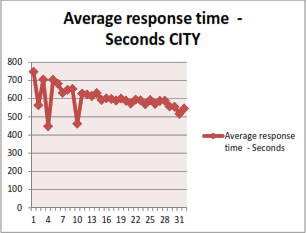 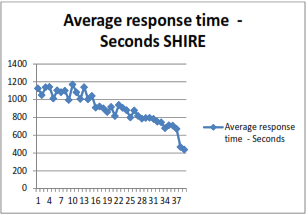 The graph displayed in figure 8 shows the classification of customer ratings for the services as per the percentage of less than 15 minute response which has been averaged for all services availed across different local government categories. The highest average is observed for the “very good” category which is more than 70% followed by “good” which is approximately 67%. The average percentage of less than 15 minute response when observed with respect to customer rating informs that majority of the people are satisfied from the service as far as service response timing is concerned. Therefore, service quality is rated well in terms of timing and with frequency of incidents increasing, it is likely that Ambulance Victoria will come across more opportunities to further improve the satisfaction level of customers.

Remember, at the center of any academic work, lies clarity and evidence. Should you need further assistance, do look up to our Business Analytics Assignment Help 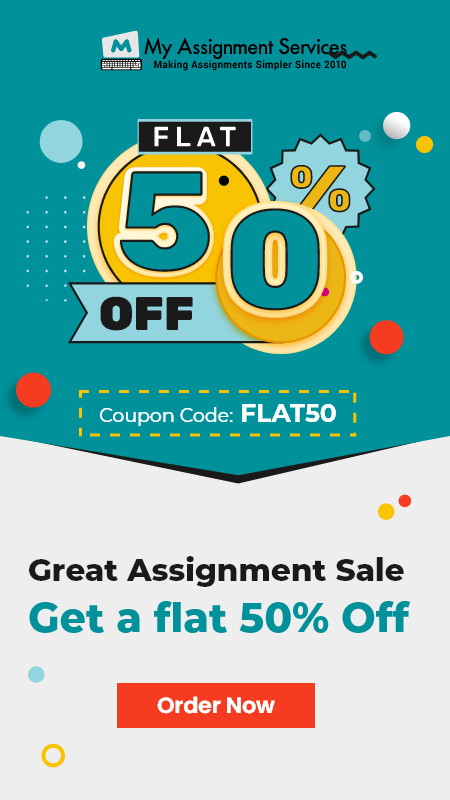