Data analysis is the processing of acquiring data inform raw material then change it into a format which s useful by a user in decision making such as information. This data is acquired using special tools such as SAP predictive analytics, SAP Business Objects Lumira and many others. SAP Business Objects Lumira commonly referred to as Lumira is a surveillance and marketing software developed for business to examine, manipulate, visualize data and investigation, it is marketed by SAP Business Objectives on the other hand SAP Predictive analytics is a software developed by SAP that build to assist companies or organizations to manipulate large amount of data set and forecast the future results and behavior. This is a more sophisticated manipulation tool meant specifically for data scientists that are automated manual inspection and manipulation.

For the case study conducted bellow we are going to use a SAP Business tool to conduct the investigative analysis of world bank. World bank is an international organization cutting across more than 187 countries, its major objective is to reduce or even eliminate poverty by loaning to various governments of its members who are poor, this promotes the economy and boost the livelihood and living stands of the people. Most of its money is obtained through loans obtained from its international capital markets, its members declared the amount of money they are willing to donate too world bank. This process is conducted after three years where he richest nations donate to the poorest countries who are only its members with no returning interests or outrights needed return (Adato, 2001).

Best example is money lend to middle incoming such as china and brazil which is a little cheaper. The bank has two main objectives to obtain by 2030, first is to end poverty off people living under $1.90 a day to 3% or more which in return will contribute to shared prosperity and by injecting into income growth of less 40% for every country. This can only be achieved through various strategies but the most common known ones are focusing on the complex goals of ending excessive poverty and encouraging shared prosperity in coexisting manner. It is committed to aid states obtain their goals with idealistic solutions that to its growing knowledge and financial services.

After installation of SAP Busness Objects lumira software for this case one can use the world bank data base which has its own analytic tools (Nehaus, 2008). Then by using the database you have to filter, analyze and manipulate it to visual data which is easier in decision making. For instance, the figure 1 shows how data is filtered to obtain exact figures which Is relevant for our case study such specific region, date and the level off wealth as per the countr.in this case scenario by use of more than one measure we are able to create and generate bar graphs and line graphs to demonstrate the distribution of various components within the world and also in a specific region. By use of distinct data type, we are comparing various aspect of the world data to determine which information is suitable in the representation of a decision which if need be. For this case we are to determine the level of poverty in various regions / country determine by recent and trustful data to decision making.

Using the simplest sample of data/ visual representation from data obtained in to show case the ideology or message that is to be passed by them. For this case after a visual representation to communicate the required information which for this case is after data extraction (Daniel, 2002). The relevant attributes are used against each other to come up with best comparison, an example is time against the level of wealth per country. If one decides to use the tool offline the acquired data from a downloadable database of the world back can be used to represent a visual data, in this case they can load the data base by click add data/ file in their ASAP tool (Ingo, 2001). By a simple way of dragging and dropping the quantitative aspect to the give visual aspect which is usually selected form the insert option found on the tool bar. A variety of options are given on the drop down list required to shows case various form of visual representation.

Given this one can generate a variety of visual aspect such as the one shown in the diagrams below, from as simple as a bar graph and complex as the world map representation of data. This will help any user or the organization to easily visualize and organize their future plans if any.

After a thorough and brief data analysis the methodology stipulated above has to be followed to get a wide scoop of what the data analyst and visualization is. For this reasons the illustrated figures bellow have been used to represent and act as sample of what this tools are expected to do in return of data analysis. 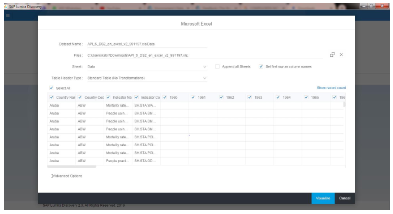 This figure is a representation of data big filtered to specific data required to show case or be used in visual data repesentaton.in this part we are to make a decision, for instance the data I was given had to be reduced to a range of 20 years which is easier to observe and be used in representations. This data analysis has helped several companies to easily come up with a decision for instance, in this case the filter can be used to show case those countries which are poor and are not making any economic changes.

Second figure is a line graph of Afghanistan a representation of a single entity being analyzed. The visual data shows after a specified period of time the development of the country is seen to be rising and falling. Hence the analyst will realize such a country has development issue and redundancy in their economic growth. In real life Afghanistan is seen to be affected by fight against the rebels who resulting to such data (Benefo, 1994). A person who does not know Afghanistan can easily digest and understand such a country has issues. This Is a prove that the visual representation can help cooperate and governments to predict and forecast for such an occurrence. In this case the world bank will take precautionary measures during lending or even investing in such a country. 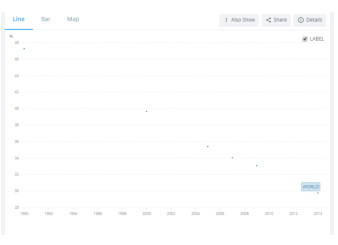 A Dotted graph above is a visual representation of data acquired over a stated period of time to show case the progress attained by world bank in the cub of poverty in the society. With increase in number of years to present results to a decrease in the number of countries being affected by poverty and are living under a minimum wage. For this case a visual representation is a well and easy way of demonstrating and show casing such data.

SAP Business objects tools is a software which has come to easy the work of cooperation’s or organization by giving them an easier way of data representation. With the appropriate planning required by any institution for this case is a world bank data needs to be thoroughly be analyzed. Nothing does this better than this tool, for instance the diagrams above can easily be understood by any user despite the complexity of the information. World bank is one of the biggest organization running in this world and has embarked on this type of strategies to easy the work load of understanding and investigating the data from the whole globe.

This has made t easier for them quickly and easily find solution for any upcoming problem, for instance the ongoing Pandemic of corona virus such data analytic can be used to find the spread and the trend at which the pandemic s taking a course. Casualties of this pandemics are being analyzed worldwide through similar process of finding the best alternative and solution according to the prediction of the future from the past data and upcoming cases. This assist in ease of control of such a pandemic n case it has surpass the unexpected result it means drastic measures are to be taken into account.

Data analysis and virtual representation of organization idea, facts, data and behavior has been ease by the introduction or creation of tool such as SAP Business objects has been of much help since it has reduced the time taken by the analyst to investigate and even come up with a conclusive decision. World health origination related companies which handle a wide or huge amount of data need such tools to monitor their progress and determine the way forward in decision making.t is with no doubt that data mining and representation has become a key role in retrieval and analysis of a wide and sophisticated data. With the endorsement and embossing of this tools data mining and analysis can be easily represented and interpreted. Much has to be put in practice but it is worth it for it makes it easier to monitor the situation by looking at the past and present and predicting the future.

Remember, at the center of any academic work, lies clarity and evidence. Should you need further assistance, do look up to our Data Analytics Assignment Help