Project Schedule – Timeline for the completion of this project

There are different industries there who deal with the AI system using the PC Work stations. This case can be widely applicable in the case of the online gaming system and trading system. The purpose of the operation of the organization is to maintain the websites of different other companies with the application of Machine learning[2]. In such an industry, the websites of those companies receive huge traffics and those are utilized for the recommender and analytical purposes. This requires the speedy processor and the highly effective underlying technology which can perform those task in real-time and within a fraction of time. ThingXthings is one such organization that performs those tasks. Thus, they are recommended to use the OC workstation with a high configuration which will be capable of monitoring all the issues. Thus, the ultimate purpose of the PC Workstation is to apply Machine learning with the help of Artificial Intelligence for effective control over the websites. The recommended configuration of the PC Workstation is the single CPU and multi GPU or the implication of fast deployment of the workloads using the Deep Learning Mechanism[3].

The system of the ThingXthings will be high-end with the processor of multi-functionalities and with the capability of parallel computing. The requirements and the component overviews are discussed below:

GPU: For a PC Workstation which will deal with the multi-processing, should have the high-end Graphics Processing unit. This is used for the high-speed processing of the 2-D and 3-D graphics and also for the 3-D graphics rendering purpose[4]. However, the GPU is chosen for the system is 4 RTX 2080Ti.

Processor: The processor of this system drives the general-purpose works like the driving of the mechanisms and to control over the ports for data transactions. This is the separate unit of the GPU and has a separate set of works there. The cosen processor for this system is Intel Xeon-W 2195 18-core. This is an 18-core processor that acts fast in this scenario and hence will increase the efficiency of the operations[5].

Storage: The system requires storage memory to keep the data and to backup it for future purposes. The storages are chosen in this context are:

Chassis: As the motherboard containing the high-speed processor and Graphics Processing unit, it becomes very hot within some times. Thus, the cooling operation and mechanism should be in the motherboard so that the semiconductor devices will not be damaged for over-heating[6]. Thus the optimal chassis with excellent cooling is chosen to protect the motherboard and other devices.

There are different configurations for such PC Workstation that are available in the market and those are widely used in a different system to control and monitor the servers and multiple systems. Three out of those systems will be reviewed in this section along with the discussion of the advantages and disadvantages of those. 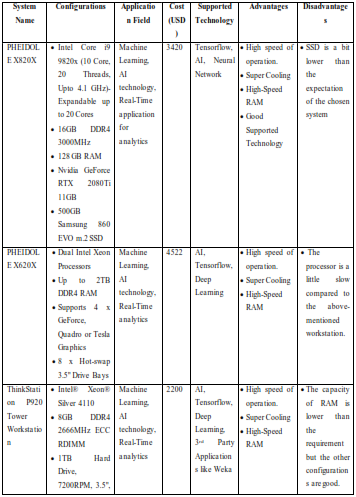 So, among these three systems, the preferable one is the PHEIDOLE X820X which satisfies the requirements for the system of ThingXthings and this will be used for the proposal of the system configuration[3].

The system that is specified in the earlier section will be chosen as the proposed system with its different good features and advantages[4]. The system is also chosen for the purpose that it is satisfying the requirements and within the budget where the calculated budget is 10000 USD. The system configuration with the partial breakdown of cost is shown below: 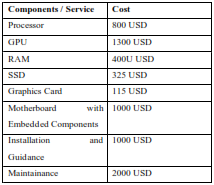 So, from the BOM, it can e seen that the estimated cost of the components and services is about 7000 USD which is below the budget and the components are obtained with the required functionality.

The system can be available in the ready form in the market. Though there are some cautions to be taken while at the time of installation to maintain the safety of the new and existing system[2]. The guidelines are:

Project Schedule – Timeline for The Completion of This Project

The project schedule will be discussed in this section and will be shown in the form of Gantt Chart as follows:

Weekly: Checking for the OS and System updates, Check for the system upgrade and available patches, Checking the operation of the Firewalls.