Task 1: A bounty on the toad

a) The cane toad, population which is denoted as one of the giant neotropical toads that have invaded the South and mainland part of given Central America. As the cane toad contains highly toxic poison glands and their tad poles also contain a toxic element which causes the other animals to get ingested. Due to the Cane toad toxic skin, it has caused widespread disruption in the form of killing the animals and has even caused a lot many wild and domesticated animals to die.  With the current ethics regulation in place, it has recommended the people to kill the toads, through the hammer. The other recommendation is to freeze them and die the animal more humanely. It has also been evitable seen, that if the animal is hit by the hammer and there is a slight misjudgement, it would only cause severe pain and make the toad splash the toxic poison on the hammer wielders eyes.

With the bounty amount of killing the cane toads and awarding the people, it would most likely cause the people to kill the cane toad and get rewarded. The people would be paid a fixed dollar amount for the number of times they have killed the cane toad and can show to the authorities. It would lead to more and more people participating as it would be incentive to kill the animal and getting rewarded instead of this. Per cane toad would cause a per dollar fixed pay, but the harmful effect can be the danger of hitting and experiencing the toxic elements. But if the community people would not participate, it would simply cause the cane toad to prey on more domestic or wild animals and cause a widespread distrust. this step would be equal to controlling the population as so far it has endangered the other people and animals residing nearby (Green, 2016).

The per dollar bounty scheme would cause an increase in funds and costs associated with the killing of the cane toads, which authorities would otherwise pay the alternative method of killing.

Per cane, toad killing is equated to per fixed dollar paid to the people. Both have a direct correlation and show a positive result.

a) In 1994, after following the NAFTA treaty between Canada, the USA, and Mexico, Mexico was imposed with the tariffs on the imports. Imports are known to be the products or services which are traded within the country. So if the tariffs are reduced on the corn, it would cause a low in the pricing and would make the price of the corns cheaper. It would result in more demand of the imported corns and there would be spurge in the high demand to the product. Overall with the lower pricing, it would cause an imbalance in the market, as more consumers would be demanding the product and there would be an increase in imported corns and if the demand is not met, it would cause a quantity shortage and hike the prices. The domestic Mexican production would get low and consumption of corn would increase as they would demand more of the imported corns and automatically the domestic corns have to priced in competition to the imported corns. It would cause higher consumer welfare and lower domestic producer welfare and overall a positive economic welfare (Metcalfe, 2018). 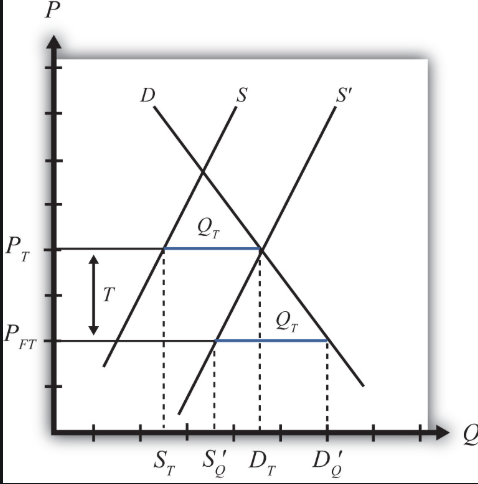 In the Figure A, of the imported corns are sold at the P(T) pricing with the DT quantity sold, of the NAFTA reduces the tariffs, it would cause the price lower to the P(FT) and cause the SS (supply) curve to shift to the (SS'), there would be more demand and supply till the point Q(R) and would sell the corn at the D(R). Eventually, with the more demand and the given supply, the market would stabilise to the P (FT) and their quantity would be sold at the S'O.

b) If their if an illegal market, in which the Mexico farmers are producing the marijuana and poppy plants, with the low tariffs on the imported corns, it would cause a more demand of the corns, but as the addicted people would still consumer marijuana and poppy in the same quantity, the demand would not be substituted with the low pricing of the corns (Werner, 2016). But, if the likelihood of getting caught and penalized increases, then the Mexico depressed farmers would incentive to grow more of the corns in comparison to the marijuana and poppy plants, which causes an infertile land. The Mexico depressed farmers to meet the growing demand of the corns, would have an incentive to switch. It would affect the market of illegal drugs, as the Mexico farmers would try to meet the growing demand of the corns by producing more and reducing the production of illegal crops.

c) It shows that there have been profits in the farmer due the seizing of the Marijuana by the Mexican army. The noticeable pattern in the data, shows the farmers are more controlled if it they are penalised. The economic principles reflect with the controlled law and order, there can be a better ways to control the market and regulate it.

d) With the presence of the drug cartels who would be dominating the market, it would cause a continuous control over the market and production of the drug, even if the demand is low or high, the cartel would exploit the market and the same drug would be exported out of the market.

In the below figure B, the drug cartel is shown, who can control the production and the relative price decision. If the enforced cartel is formed it would cause the selling of the drugs at the B point, but it would be sold at the D point at the quantity Q equated to the demand. 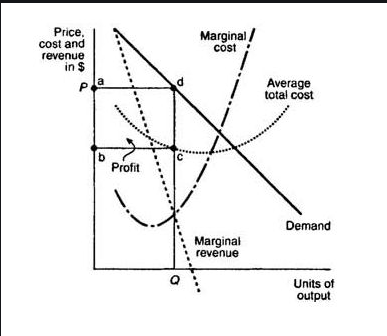 e) Another issue is of the Mexican drug market that would cause continuous cartel-related violence. If the rival groups would have control over the land that would include the illegal crops, they would still control the market and show how there would no changes in the market. Another factor is of the violence which would cause enforced cooperation in between cartel members. The prices of the corns would be affected, as there would-be still certain consumers who would demand only corns and the other consumers would only demand the drugs. If the production of the drug is in the same scale as of the corns, then the drugs would be produced more due to the enforced violence and the related conflicts. It would eventually cause the corns price to rise, as the shortage would be met through the imported corns and domestic producers would not produce much of the corns.

f) (i)  Reduced tariffs by the NAFTA was intended and enforced cartel formation.

(ii) unrelated consequences were the violence, clashes and the disruption of the peace.

(ii) polices such as making cartel illegal and encouraging the depressed farmers to switch would be a better approach (Oeindrila Dube, 2016).

Oeindrila Dube, Omar García-Ponce and Kevin Thom. 2016. From Maize to Haze: Agricultural Shocks and the Growth of the Mexican Drug Sector, Journal of the European Economic Association, 145:1181–1224. http://ezproxy.deakin.edu.au/login?url=http://search.ebscohost.com/login.aspx?direct=true&db=eds gao&AN=edsgcl.464777017&authtype=sso&custid=deakin&site=eds-live&scope=site

Werner, R. A. 2016. A lost century in economics: Three theories of banking and the conclusive evidence. International Review of Financial Analysis, 46, 361-379.