a. As per Balloux and Dorp (2017), the microorganisms that cause diseases to their hosts are termed as pathogenic microorganisms. There are two main types of pathogenic microorganisms that cause severe disorders to their hosts; these are bacteria, and viruses. Bacteria are the single-celled prokaryotes that do not have a well-defined genetic material. Comma-shaped bacteria, rod-shaped bacteria, spiral-shaped bacteria, and spherical-shaped bacteria are the various types of bacteria on the basis of shape. Some bacteria live as single cells, while others live in the form of colonies (Microbiology Society, 2019). Bacteria have an outer cell wall for protection; cilia and flagella that support locomotion. Viruses are the organisms that have an outer protein coat called capsid that contains the genetic material. All viruses require a host organism to reproduce and make their multiple copies (Louten, 2016).

b. The microorganisms that convert themselves into pathogens under certain circumstances are termed as opportunistic pathogens. They attack the hosts that have a suppressed immune system because it is easy to attack a weak immune system than attacking a strong immune system. These types of microorganisms thrive better when the host's body is deteriorating. For example, the patients suffering from AIDS (Acquired Immunodeficiency Syndrome) are easy targets of opportunistic microbes (Biology LibreTexts, 2019a). As per Biology LibreTexts (2019d), opportunistic pathogens differ from primary pathogens in the following ways:

c. All the following general safety rules and regulations must be followed while working with microorganisms in the biomedical laboratories (America Society of Microbiology, 2019):

d. As per King and Kang (2018), ultraviolet radiations are used to destroy the pathogenic microorganisms such as bacteria and fungi. There are different types of UV rays, such as UV-A, UV-C, and others. However, UV-C is most effective in destroying microorganisms as it destroys their genetic material. The UV-C rays are used in biomedical laboratories to clean the equipment and make them free of unwanted microorganisms. It helps researchers in conducting safe and effective experiments. Most of the bacteria and other organisms die due to UV-C rays, but some are still viable. The number of viable bacteria that are left after incubation with UV-C rays can be counted by the method of plate count. Plate count is one of the most commonly used methods of detecting viable bacteria in a solution. In this method, the number of actively growing bacteria is counted to identify the number of bacteria which are still alive after being irradiated by UV-C rays (Biology LibreTexts, 2019b).

a. As per Louten (2016), viruses are small organisms that need a host to reproduce. These are very small in size and have an outer protein coat that contains deoxyribonucleic acid (RNA). This outer protein coat is termed as the capsid, and it protects the viral genome from the external environment. The nucleic acid, along with the capsid, forms a structure called nucleocapsid. The viral genome is enclosed by the protein coat or capsid. There are different forms of viruses on the basis of structure. For example, the viruses that have helical capsids are termed as helical viruses. The viruses that have an icosahedral capsid are known as icosahedral viruses, while the viruses that have a complex capsid are known as complex viruses. These viruses do not have a helical or icosahedral capsid. The complex viruses are named so because they have complex structures such as protein tails (Biology LibreTexts, 2020e).

b. Viral diagnosis is the method that is used to detect any form of viral infection. There are three types of viral diagnosis; direct detection, serology tests, and viral isolation. The direct examination of viral particles and antigens in the host body is termed as direct detection. In this method, Transmission electron microscopy (TEM) is used to collect the direct images of the viruses. Another method of viral diagnosis is immunofluorescence assay in which the virus antigens and virus-related antibodies are detected to check the presence of viral infections. Immunofluorescence assay is a type of viral isolation method because the viral antigens and virus-related antibodies are isolated in this method. In this method, stains such as fluorescent antibody (FA) stains; immunoperoxidase stains are needed. However, the most common way of viral diagnosis is serology testing, in which the rising titres of antibodies are detected. The amount of antibody IgM is also detected in serology testing because the body releases IgM antibodies during viral attacks. There are different types of serology tests such as Western blotting, particle agglutination, Enzyme-linked immunosorbent assay (ELISA), and many more.

The serology method is used for detecting the virus infections that cause measles, hepatitis A, hepatitis B, and many more (Brahamchari, 2019).

b. The process of isolating cells from humans or animals and then proliferating them is termed as primary cell culture. In this method, the isolated cells are kept in a solution to induce proliferation. The proliferated cells are then transferred into new media solutions for continued growth. The tissues isolated from the organs can be grown in-vitro by following the steps of primary cell culture. The process of primary cell culture is performed in three major steps. The first step is isolation in which a part of the organ is isolated and removed out by using mechanical and enzymatic dissociation. Trypsinization is one of the most commonly used methods of enzymatic dissociation used for the development of primary cell culture. The second step is culturing in which the isolated tissues are cultured in the culture media. And the final step is the proliferation in which the cultured tissues are added in new growth media to induce continued growth (Bhatia, Naved & Sardana, 2019).

d. Stem cells differ from the differentiated cells in the following ways (Lakna, 2017): 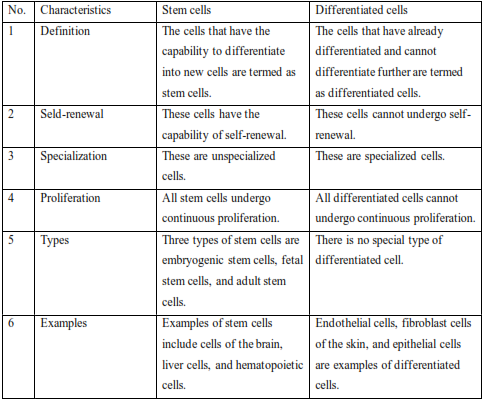 b. As per Science Learning Hub (2017), PCR or Polymerase Chain Reaction is defined as the molecular biology technique which is used for DNA amplification. It is used by the researchers to amplify the DNA sample. The process of PCR helps the scientists and researchers to make many copies of the small DNA sample. The method of PCR is important in research and medical diagnosis as it is difficult to conduct long term researches by using a small DNA sample. Researchers need a sufficient amount of DNA samples to conduct complex experiments. The basic requirements of PCR are the DNA segment that is to be amplified, primers, nucleotides, restriction enzymes, and Taq polymerase. The process of PCR starts with denaturation, in which the two strands of DNA are separated from each other. The next process is known as annealing, in which primers are added to the DNA to induce polymerization. The final step is termed as an extension in which Taq polymerase and nucleotides are added to the DNA to increase its length and to form its copies. The results of PCR can be viewed by using the method of electrophoresis. The newly produced DNA fragments appear as bands on the gel, and these bands can be viewed in the UV box after performing gel electrophoresis.

American Society for Microbiology. (2019). Guidelines for biosafety in teaching laboratories. Retrieved from https://www.asm.org/getattachment/3c1eb38c-84d7-472f-aa9b-5d695985df21/ASM-Biosafety-Guidelines.pdf

Science Learning Hub. (2017). What is PCR? Retrieved from https://www.sciencelearn.org.nz/resources/2347-what-is-pcr

Remember, at the center of any academic work, lies clarity and evidence. Should you need further assistance, do look up to our Medical Education Assignment Help