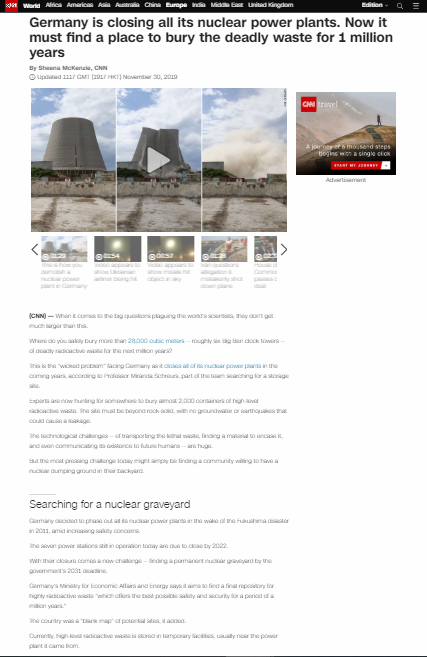 Germany is closing all its nuclear power plants. Now it must find a place to bury the deadly waste for 1 million years

CNN published an 830 words article which is sourced its information from Germany’s Ministry for Economic Affairs and Energy on November 30, 2019. The title of this article is “Germany is closing all its nuclear power plants. Now it must find a place to bury the deadly waste for 1 million years”. The article explains the precautions Germany has been taking to help the environment. As nuclear energy is the most preferred and reliable source of energy creation, still it has a lot of harmful effects that are causing a lot of deaths due to the radioactive waves/ radiations emitted by the nuclear plants. Nuclear energy is one of the most efficient, powerful and the most available sources of energy all over the world. Moreover to generate 1-kilowatt hour of energy nuclear power plants emits just 12 grams of CO2, which is almost 3 bottles of 2 liters.

Where on the other hand, coal plants emit 820 grams of CO2 which is must more than a nuclear plant. In addition to that the article states that Nuclear power is not the long term solution for the coming decades perhaps it is the most dangerous substance on earth. The scientists have roughly calculated the 28,000 cubic meters or equal to the six big ben clock towers of waste to be disposed produced by the plants. As defined by the professor Miranda Schreurs, part of the Germany’s team to find a safe and permanent storage site explains that Germany is seeking a site which can store almost 2000 containers of high- level radioactive waste. She further stated that the place should be beyond rock-solid with no ground water or earthquake that could cause damage to the containers which leads to the leakage and deaths in that particular area (McKenzie, 2020).

There are ethics concerned in this case. The four issues involved in this case are the Integrity, Corporate social responsibility, respect and Concern, and fairness. The stakeholders affected in this case are the population, people of the state, the workers, and the government of Germany. As the nuclear plants have been shut down, the major affect will be on the government and the economy of the state. The costs of demolishing and the reconstruction of the new facility of the substitutes of the nuclear plants will be bared by the government in the present and the people will be affected by the unemployment as the demolition of the plant will leave the people with no jobs in present and in order to maintain the jobs the people have to update their skills according to the new required plant and the techniques. The government is taking care of the ethical issues as they are taking care of everybody including the future spices that will be living on this earth for the next million years from now.

The first ethical concerns is the integrity, as Germany demonstrating their trust on this case and are taking preventive measures to avoid and eliminate the cause of the radioactive waves caused by the nuclear waste produced when the uranium has emitted all its energy and is of no use but still emits the energy. Those nuclear rods take a take to cool over 20 years.

The second issue Germany’s government is working on the corporate social responsibility as they are concerned for the present environment as well as the future environment of the world.

The third issue the government is taking care of is the fairness, as they are transparent in sharing the news and updates about the case. Moreover they are doing various things to educate the future generations. The scientists are trying to find every possible language that can be invented a few decades after. That caution note is being passed and is being published in every possible language and even the notice is passed in terms of the images, scriptures and many more signs that depict the danger sign.

The last concern for the government of the Germany is to respect and concern about the population living in the state as well as the world.  They have decided the deadline to find a permanent graveyard in Germany till the 2031. The government is transparent about their storage facility all over the country and has shared the picture sourced by the Clean Energy Wire (CLEW), federal office for the safety of the nuclear waste management, Graphics by the Wooojin Lee, CNN. 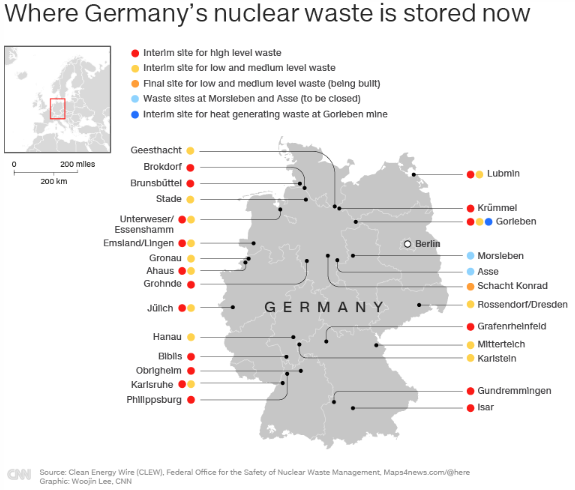 The case further discusses that Communication experts in the country are working on the how to tell future generations which will be living on this earth after the thousands of years from this date. According to the Reuters (2020) when language will be completely different from now, the experts are finding different ways to convey the message that the site which contains the waste should not be disturbed, otherwise there will be dangerous waves leaking and destroying the environment and the lives as well. Schrems in the article gave an example of humans destroying the Egyptian civilization just out of curiosity. She compared the opening up the pyramids to opening up of the sealed containers having death in them. Many people are also coming up to spreading awareness about the site not be discussed.  Both Ukraine and japan has suffered from these radiations as many deaths occurred due to these radiations. Many of the population were removed and ordered not to come back in that area. There was a great loss of lives as well in the monetary terms to the economy due to the radiations leakages.

Where on the other hand Finland has already found a place where they are storing the waste which will be buried there for the rest of the life (Reuters, 2020). The government of Germany has already approved and granted the license for the construction on the island of olkiuoto having an area of 230 km northwest of Helsinki. The above the ground an encapsulation is being built on the underground sealing of the uranium rods which emits the harmful radiations (Reuters, 2020).

According to the IAEA, (2020) 14 countries are having the stockpile of highly radioactive fuel spent around a quarter of a million tonnes. They are spending these funds in cooling the pools where these rods of disposed uranium has been stored. If this power which is keeping the water cool despite of the uranium rods emitting the energy goes off then the serious condition of meltdown can happen. These are the temporary solution to keep the radiation away from the people around.

Some of the recommendation to this case will be teat the communication experts should be communicating the messages and they should work towards one common language which will last for centuries. They are as it is working on the images, scriptures, symbols, etc. to convey the messages to the future generations and that the world will be safe from the dangerous effects of the poisonous waste generated by the uranium. In addition to the fact, the uranium is a resource is now close to extinction. The resource is now not must available that it helps the future generations as well. The biggest problem arising in the nuclear power plant is the nuclear waste which is generated in a huge quantity. The commercial power plants works on a process of nuclear fission. When the individual atoms split they creates energy and after years of emitting energy the ore becomes insufficient in producing the energy converting the uranium rods into waste, but they still emit high amount of radioactive waves which causes harm to the environment and the human lives as well.

In conclusion every bit of the waste needs to be stored in the permanent containers and must be saved from the human’s curiosities that will ultimately kill the human race.

Sheena McKenzie, C. (2020). Germany is closing all its nuclear power plants. Now it must find a place to bury the deadly waste for 1 million years. Retrieved from: https://edition.cnn.com/2019/11/30/europe/germany-nuclear-waste-grm-intl/index.html