Heart failure is a chronic and progressive condition where the heart muscle is unable to pump enough blood to meet the blood and oxygen demands of the body (Guazz&Naeije, 2017). The major risk factors that are associated with heart failure in Russel include his medical history of hypertension, cholesterol, alcohol consumption, diabetes, history of chronic smoking, and heart attack (Guazz & Naeije, 2017). Hypertension causes the narrowing of blood vessels and blocks the blood passage. This enhances the chances of developing heart failure. Individuals with a history of smoking are also at a greater risk of developing heart failure. Smoking results in atherosclerosis and contributes toward heart failure. Further, the oxidative stress caused impacts the myocardium leading to systolic and diastolic dysfunction in the individuals. The heart failure in Russel is also associated with his alcohol consumption.

Long term alcohol abuse causes weakening and thinning of the cardiac muscles that affect the ability of the heart to pump blood. As the heart struggles to pump blood efficiently, the lack of blood flow disrupts the major functions of the body resulting in heart failure. Moreover, Russel is also diabetic. Patients with diabetes have an increased risk of developing heart failure. Diabetes causes a reduction in the ejection fraction as excess glucose damages the arteries resulting in atherosclerosis. Russel also has high cholesterol which further contributes to the risk of heart failure by constricting the arteries and restricting the blood flow. Fifteen years back, Russel had also had a heart attack, this can also contribute towards heart failure. Heart attack can lead to heart failure by weakening the pumping ability of the heart. As heart attack causes damage in the cardiac tissue, the muscles fail to contract appropriately hindering the blood supply and weakening the ability of the heart to pump blood.

Question 2: Pathophysiology of The Left Side and Right-Side Heart Failure

In the case of Russel. Left-sided heart failure is observed with dilatated left ventricle and severe systolic anomaly. In the case of Russel, a dilated left ventricle is observed with an extraction fraction of less than 25%. This condition is called dilated cardiomyopathy and is one of the major causes of heart failure. As the ventricle thins and stretches, it loses its ability to pump blood efficiently and results in heart failure. The major cause of dilated cardiomyopathy has been recognized as hypertension and atherosclerosis, both conditions that have been dominant in Russel. The left-sided heart failure occurs primarily due to anomaly in the cardiomyocyte function, collagen turnover, and changes in the extracellular matrix (Harjola et al., 2017). In the left-sided, systolic heart failure, as the ventricle contracts poorly, there is a decreased volume and pressure and decreased ejection fraction.

This is also associated with anomalies in ATP utilization and electrophysiology of cardiac muscles that occur due to changes in intracellular calcium modulation (Guazz&Naeije, 2017). In left-sided diastolic heart failure, the left ventricular filling is impaired that causes an increase in the left ventricle end, diastolic pressure at rest, or exertion. This occurs as a consequence of an anomaly in the ventricular relaxation, that is an active process. The ventricle may show enlargement and stiffness. CO decreases and the pressure in the pulmonary vein increases. As this pressure exceeds the oncotic pressure of the plasma proteins the fluid is released from the capillaries impacting breathing. This results in lymphatic drainage and causes edema and the ventilation-perfusion is altered. Pleural effusions may develop that can aggravate dyspnea (Francis & Tang, 2019).

Right-sided heart failure occurs when the right ventricle fails to pump the blood. The heart failure that involves the right ventricular dysfunction involves a systemic increase in the venous pressure that leads to fluid extravasation and edema. It largely impacts the hepatic and renal function, unlike left-sided heart failure that severely impairs the respiratory system. This also leads to fluid retention in the vital organs (Francis & Tang, 2019). The reduction in the perfusion of skeletal muscles causes atrophy in the cardiac fibres causing weakness, increased fatigue and decreased peak strength. The molecular changes include myocyte hypertrophy, calcium homeostasis regulation anomalies, cross-bridge cycling problems, and changes in the cytoskeletal structures. Changes in the excitation-contraction coupling problems also contribute to heart failure (Francis&Tang,2019). 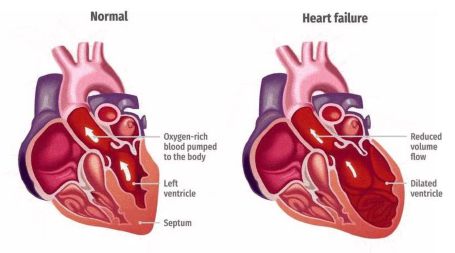 Chronic obstructive pulmonary disease (COPD) is a chronic health condition that occurs due to damage in the airways and alveoli (Kim & Lee, 2017). The disease is characterized by the poorly reversible airflow and abnormal inflammatory response in the lungs. The pathophysiology is characterized by mucus hypersecretion and ciliary dysfunction in the respiratory tract. This also causes airflow obstruction and hyperinflation affecting the respiratory cycle of the patient. Systemic inflammation occurs in the skeletal muscles that impact the overall health of an individual suffering from COPD (Kim & Lee, 2017). The exacerbation of the disease is associated with neutrophilic inflammation and an increase in the number of eosinophils. The airway obstruction is increased and pulmonary gas exchange is hindered, this occurs as a consequence of inequality in ventilation and perfusion causing muscle fatigue. This reaction further leads to inflammation, mucus hypersecretion, bronchoconstriction, and edema (Wedzicha et al., 2017). This limits the oxygen availability in the body and triggers hypoxia. Further, respiratory muscle fatigue is also observed in the exacerbation of COPD. This fatigue is responsible for triggering hypoxemia, respiratory acidosis, and hypercapnia directing respiratory failure in the patients (Hikichi et al., 2017).

The major factor that has led to COPD development in Russel is smoking. Inflammation is present in the small airways and lungs of chronic smokers (Anzueto&Miravitlles, 2017). In patients with COPD, the regular inflammatory response against the inhaled toxins is aggravated which further causes tissue destruction, impairment of the defence as well as repair mechanisms in the patients. The inflammatory and the structural changes that are associated with the condition are severe and persist in after smoking cessation in the patients. There is also an anomaly in the proteases and the antiproteases, oxidants, and anti-oxidants in the patients. This results in the development of oxidative stress. As a result of the recognized oxidative stress, the inflammatory response is triggered. Smoke activates the macrophages and the epithelial cells that release chemotactic factors (Hikichi et al., 2017). These chemotactic factors recruit the neutrophils and the CD8 cells from the immune system and cause activation of the fibroblasts (Anzueto&Miravitlles, 2017). As a consequence, an abnormal repair is activates leading to bronchiolar fibrosis and alveolar wall destruction and emphysema. The proteases in the body triggered by smoke or irritant in COPD also causes the release of mucus. This results in an increase in the oxygen burden in the patient further intensifying the reaction in the body (Gelb et al., 2016).

Other factors that are associated with the risk of COPD exacerbation in Russel include occupational exposure to dust and smoke. Russel is a truck driver and therefore, to sustain his work, he is often surrounded by fumes and burning fuel. According to Kim and Lee (2017), occupational exposure to dust, gas, vapour, fumes, etc. are common and significant factors that impact the occurrence and exacerbation of COPD in patients. Since Russel spends a large amount of time on the road, he is at high risk of developing exacerbation of pollutants and fume toxins released by the vehicles. 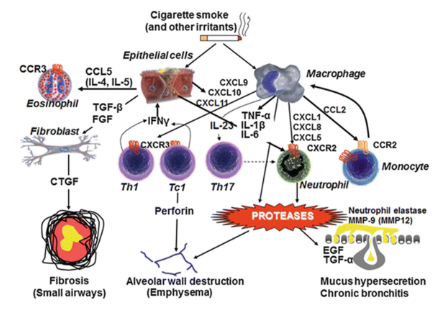 Question 4: Information About Some Drugs Prescribed for Russel

Table 1: Information about some drugs prescribed for Russel.

Prevention of exacerbation of COPD

References for Pathophysiology and Pharmacology Applied to Nursing