The assessment details of the motorcyclist Jamie reveals that he has a lacerated liver that refers to the liver injury that is a form of trauma sustained to the liver. The functions affected are include liver is unable to make bile that affects digestion and it is unable to filter and clean the blood. It is no more able to store the carbohydrates and vitamins and also does not make proteins and clotting factors. It does not normally break down hormones and certain drugs that affect its normal functioning. Almost all of the blood passes through the liver and at a specific time, there is a total of one pint of blood within the liver (Cox et al., 2018). The liver laceration results in the bleeding and this blood loss can be life-threatening. The abscesses within the liver, cholecystitis that is inflammation of the gall bladder, leaking bile and the liver failure are other common results of liver laceration (Midi et al., 2019). 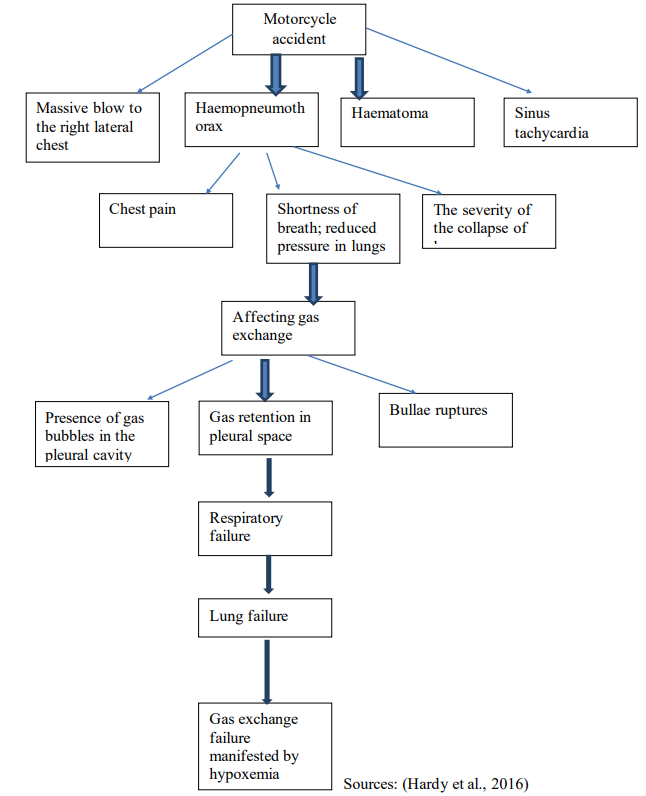 The kidney is an important organ of the human body that performs varied functions. The functions performed by the normally functioning kidney include maintenance of the overall fluid balance, filtering the waste material like the toxic substances and other waste materials and also plays an important role in regulating and filtering the minerals from the blood (Remer, 2018). It also has a major role to play in controlling the acid-base balance and the water and electrolyte balance. It controls the blood pressure and produces the hormone erythropoietin along with functioning in activating vitamin D. The haematuria is a condition when the red blood cells are found in the urine of the patient. This is because of the unhealthy functioning of the kidneys that fail to filter the blood into the urine that means the filtering process of the kidney is impaired (Zittema et al., 2016). The blood leaks into the urine and the blood can be seen into the urine either through the use of a microscope or there is red colour urine that can be seen through the naked eye. In this case, Jamie has developed this condition of haematuria because after the motorcycle accident she was diagnosed with a haematoma in her body that is a solid swelling of the clotted blood within the tissues (Sevillano et al., 2017). This is the cause of haematuria in this patient as this solid swelling of the clotted blood is causing redness in the urine.