The selection of different projects by an organization can be done using a number of methods. These methods are categorized into two broad categories as shown below: 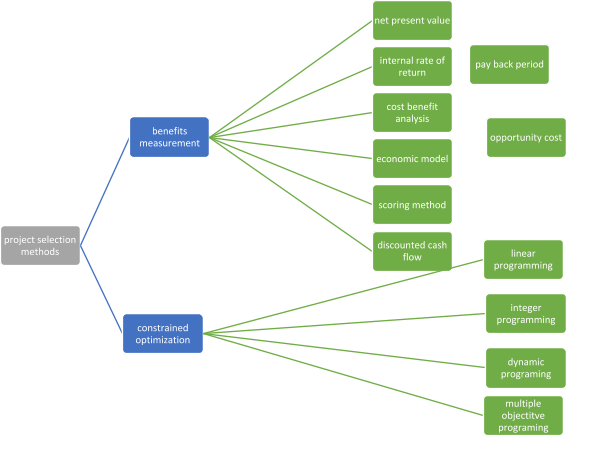 The figure above shows the commonly used project selection methods by the organization. The benefits measurement tools are used by the organization as comparative approach. This evaluates the projects on the basis of their benefits, revenue, profits etc. The constrained optimization tools have a mathematical approach and these are mostly employed for large projects as suggested by Monnappa, (October 4, 2019). Several calculations are needed for these methods to select a particular project.

The benefit measurement methods are explained below:

This method uses objective methods for project selection. The organization selects a set of criteria which are important for a given project. These criteria are given according weights as per their importance in a given project. The projects are given weights according to the criteria. The aggregate is obtained by totaling the weighted values. Selection is made for the project which has the highest score as per this method.

It is also referred to as Economic Value Added (EVA). This method is similar to the technique of cost/benefit ratio as this method also describes the difference between the investment and the revenue on one figure of profit. EVA is defined as the net operating profit after tax. This methods provides the picture of quantifiable benefits of the project after its completion.

This technique considers the time which the project shall take in recouping the expenses. It is ratio investment incurred on project and the net cash inflows per annum. This is expressed in years. This is time required by a project to return the investment made in it. This has been traditionally used however there has been many limitations. This method does not reflect on the time value of invested capital. It also does not consider the profits which are generated after the project is completed according to Gaur, A. (March 24, 2019). In addition to this the risks which are associated with the projects are also not accounted for in this method. The selection is made for the project which has the shortest time or smallest number of years for paying back the initial investment made.

In this method the PV of the benefits which will accrue from a project are estimated for future. The calculations for the return value from a project is done. The present value of the future benefits are then assessed using the time value of money and the rates of inflation.

With the use of DCF, the NPV method helps in analysis of the entire lifecycle of a project in terms of revenue generated. In this method, the PV of the cash inflows and the PV values of the cash outflows are subtracted. For a profitable project this has figure has to be positive. The projects which have the highest NPV are chosen. This is advantageous as it integrates the concept of discounting of money as suggested by Meredith, Mantel Jr, & Shafer, (2017).

This method integrates the NPV in its calculation by making it zero. This implies that the cash inflows for a project either negative or positive are able to balance each other. The IRR is determined when PV of the inflows is equaled to outflows for a project. The projects which have a lower than the required rate of return (RRR) of the company are not selected. It is used for ascertaining the worth of a particular project as any project can have lower value for IRR but a higher value for NPV. In the scenario of no capital constraint the project with high NPV is selected as it can generate more revenue.

It is the cost which is missed on opting for a particular project over another. It is more of a supplemental technique however this allows the managers to out certain projects’ choice into different perspective.

The mathematical approach for project selection is used for larger projects according to Ahmad, (2016). This requires complex mathematical solutions. Following are four mathematical methods:

In this method the cost incurred on a given project is reduced by decreasing the time taken for completing that project.

The different projects are analyzed for their integer values and not on their fractional values.

In this method a complex problem is broken into a number of simple solutions. The project is selected which has many simplified elements as it is comparatively easier to complete tasks. In this method a number of systematic procedures are used for determining the combination of decisions.

In this method multiple solutions are developed for a problem. Decisions are made by using the statements of If and Else. There are number of methods which can be used for conducting multiple objective programming and these are priori, posterior, hybrid, interactive and no preference methods. In multi objective programming, one solution is not enough to optimize each of the problems according to Gaur, A. (March 24, 2019). Then the problems are considered as conflicting and there is a probability of many optimal solutions.

There are non-financial reasons for selecting or rejecting a project. For instance, the project has to meet the organizations’ strategic objective. The project has to be in legal boundaries. Also the project which has damaging environmental impacts are not selected. The non-financial gains and loss are also taken into account for the selection of a project by the management of an organization according to Jeston, (2014).

It is one of the most important elements for the management of a project. This is because it forms the foundations for a project undertaken by an organization as suggested by Windsor, (July 17, 2018). It is a reference point in the entire lifecycle of a project for the project team and for the client. This is a decision document on that basis of which the project activities are developed. These documents are important initial inputs for a project.

The important documents and process which are carried during the initial stages of a project are given as follows:

Business case- this document informs the manager of the reasons for undertaking the project and how the project has to be progressed for meeting its strategic goal. The objective, stakeholders and requirements of a project are given in this document. It also provides detail of the cost and benefit analysis and the investment which is needed for executing a given project.

Feasibility study- this document covers the feasibility of the selected project or the likelihood of its success.  This study highlights the correct way for approaching a given project.

Project charter- this is an important document which details the structuring and execution of the project. This document formally authorizes a project. This has the names of the stakeholders and their specific needs and requirements. Further it also has the information for the initial requirements which has to be met by the project. It also contains the policies, guidelines and objectives of the organization.

Project scope statement- this defines the work and the deliverables of the project. The major objectives of a project and the customer business objective. It also covers the impacts of the quality, cost and time of the entire project.

Apart from it, there are a number of documents which are created in the project initiation phase. These are agreement contracts between the organization and the third party which is assigned the projects, service level agreements, statement of work (SOW) and memorandums of understanding (MoU). The SOW is used for defining the deliverables for a project and the time period taken for the different activities in a project by an external party.

The project initiation process group is comprised of the processes which are necessary for defining a new project or a new stage of an existing project. This involves the process for obtaining authorization for a project stage or an entire project. It defines the criteria for success, deliverable and objectives. The project manager is assigned and resources and funds are allocated.