SCIE4403 The Conduct, Ethics and Communication of Science Assignment Sample

The Response of Wallabies on Human Presence

In a wildlife sanctuary, most of the animals react differently when approached by human beings. It was experimented in four species of the macropodid animal species; Bridled Nail tail wallabies, Red neck wallabies, swamp wallabies, and the Eastern Grey Kangaroos. Researchers used vehicles and went on foot sometimes to get the animal response. When they went by vehicle, the animals could flee at shorter distances than when they saw the researcher approaching on foot. A good proportion of the animals fled to forests and preferred there than the grasslands because of the continuous interruption by the frequent tours in the grasslands. Because macropodids did not flee for longer distances when approached by a vehicle, the author terms it as the preferred mode of conducting tours in sanctuaries. The negative outcome of the tours approaching the animals on foot out rules the use of the technique in the future.

Most of the human beings' perspective is that animals, especially wild animals are predators. Contrary to that, most of the animals flee when approached by human beings. Others may change their habitats to other areas where they feel safer, a step that brings up many implications for their survival as the author puts it. The distance between the animal and humans together with the mode of approach to the animal are the predominant factors to the effect in the change of animal behaviors. Also, when approached, different macropodid species will react differently. This fact brought up the need to investigate how distance and mode of approach affect the response of macropodids and other marsupials. Four macropodid species were used to determine their response when approached by humans and the impact of the response to the animal. Although the author observed the animal response behavior clearly, there is a great limitation over the animals he used for experimentation.

The author experimented with this work at the native Flora and Fauna Sanctuary. The area was agriculturally pre-occupied in the past. A good percentage of the sanctuary was covered with grasslands and it had a good drainage system. The study was conducted at the times when there were little rains in the state. Six tracks are availed in the sanctuary to be used as pathways by the public. Animal food was as well placed on these pathways. The animals were separated through fencing in the wire mesh. The author views the fencing as the best mode of separation of the animals. This was wrong as some animals may target higher and jump over the meshed fence then attack the surrounding environment. Electric fencing would alternatively be the best as far as the safety of tourists and other animals is concerned. The sanctuary staff ensured an adequate supply of food to the animals and burning to reduce bushfire risks (Gaynor K.M et al, 2018).

The author studied only four macropodid animal species: The Eastern grey Kangaroo, the red-necked wallaby, the swamp wallaby, and the nail tail wallaby. The experiment data majorly based on the animal mothers with single young, a fact that limited the outcome of the experiment. To attain the best outcomes, they were supposed to base the data on all the four animal species despite their gender or age as per Parcel, J, Sarin et al. (2018). They observed the grasslands as the main dwelling areas of the macropodids and collected enough data about them. The data collection took the author two months before he began analysis. Different approaches were used to find out how animals perform different activities like feeding, grooming, interacting with conspecifics, and looking up (Tablado, Z., & Jenni, L. (2017). The five-minute approach was used to observe each activity.

The five-minute approach was as well used by the author to observe the response of the animals when approached while engaged in different activities like feeding. The animals were approached when the researcher was either in the car, on the track, or off the track. The flight distance depended solely on the method used to approach the animal. The limited duration of one hour set up by the author for the experiment would not bring out more accurate results. More time was therefore required to involve the animals completely and attain the best results (Garnic S, et al, 2018). The flight distance of the four animals was recorded every day. The distance was determined majorly by the activity that the animal was involved in and the method used by the researcher to approach it. The recorded data was then analyzed using the parametric and the non-parametric tests.

The outcome, according to the author showed that three macropodid species spent little time when approached during eating, resting, grooming, and interacting with the conspecifics. The time spent by the animals to respond when approached using all three approaches was almost the same. Also, the author puts it up that the distance of the researcher towards the animal did not matter the response taken. However, the distance between the researcher and the macropods was shorter when approached using a vehicle than when approached on foot. The off-track and on track approaches did not show variations in almost all the animals. The author claims that there were no significant differences in the proportion of the macropods in the grasslands for different days. However, the research was too limited in terms of the number of the macropod species used to come up with such a conclusion. More so, the study was carried out during the dry season, the time when most of the animals flee in search of better pastures. More focus was supposed to be pinned on the best season to find many of the animals and observe more samples to come up with a concrete conclusion. The author claims that the proportional differences of the macropodids found in the grasslands on different days were the same. 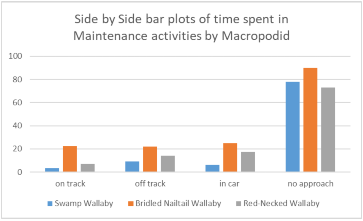 The Graph 1 above shows the percentage of time spent in "maintenance activities" for different wallabies. 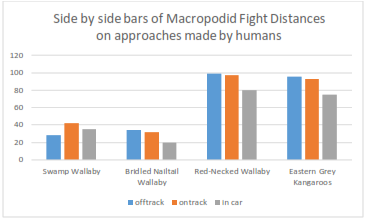 Graph 2 above shows the flight distances of all species of wallabies. 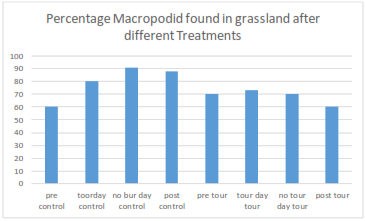 The Graph 3 above shows the percentage of macropodids that could be found in the grasslands after different treatments.

According to the author, while the animals were having maintenance activities, they reacted negatively to the approach of the researcher despite the mode of approach and the distance. Contrary to the results on research carried out on different mammals, the macropodid species did not show a change in response to the researcher approaching on track or off track. The other mammals believe that pedestrians on track focus on their journey while those off-track may have intentions of harming them. This was a more detailed analysis of many mammals that was irrelevant in the context of the study (Muller, S. M. (2020).

Lack of exposure of the sanctuary macropodids is associated by the author as the contributing factor to frequently habituate humans on track or off track. The animals may not have noticed the difference in distance of the researcher as they had already developed their mind that despite the distance, they had to move to safer parts. The flight distance of the animals when they were approached in the vehicle was much little than when approached on foot. More emphasis was supposed to be put on the animals highlighted for the study than the other irrelevant details to the context.

Different approach methods impact differently on different animals. This has brought up the need to come up with the best method of approach that can be used by tourists on different animals. Besides, the best techniques that reduce the impact of the human approach to the animals may as well be determined by the previous experience of the animals. Since flight distances were shorter when the animals were approached in a car, tourists should use only vehicles when visiting the sanctuary. This may however not be comfortable with all tourists. The impacts that the tourists have on these animals should be taken into consideration as it might affect the wildlife adversely.

The macropodid species require to carry out several activities to maintain their good health. However, these activities may be affected by approaching animals more frequently. This will impact the reduction of their routine activities like feeding and grooming that will depreciate their health subsequently. The author used limited methods of research to come up with the overall results. The animals used for the experiment were just a few that could not generalize all the macropodid species. He experimented during the dry season, a period when some of the animals have difficulties in getting pasture. Most of the animals might have migrated to areas with easy access to pasture, a fact that makes the observations biased.

Remember, at the center of any academic work, lies clarity and evidence. Should you need further assistance, do look up to our Science Assignment Help