1. Summary: adrenergic drugs are a diverse class of drug which antagonize the signalling of sympathetic nerves by directly mimicking the function of norepinephrine and epinephrine or by indirectly inducing the release of norepinephrine. These neurotransmitters are also known as adrenaline or noradrenaline, therefore referred to as adrenergic. Adrenergic drugs can either induce or inhibit the norepinephrine or epinephrine activity in different tissues. This type of drugs generally bind directly to the adrenergic receptors of the body, which are of different types such as, alpha 1 and 2, beta 1, 2 and 3. The drugs can be classified based on the type of receptor it binds to. The primary clinical uses of these drugs include increasing blood pressure by stimulating the rate of heart muscle contractions to combat life-threatening health issues like cardiac arrests, acute bronchial asthma attack, sudden severe allergic reactions, and many other cardiovascular and respiratory disorders.

2. Drug Class: Adrenergic drugs are of different types depending upon the targeted receptors to which they bind. . The adrenergic receptors are of two different types i.e. alpha and beta. Alpha receptors are subdivided into α1, α2 and beta receptors are subdivided into β1, β2, β3. Their mode of action also may be direct by binding to the receptor or indirect by acting as a messenger or a signalling molecule (Ciccarelli et al. 2017). Some drugs may stimulate the response known as adrenergic agonists or sympathomimetic agents and the ones that suppresse the response are known as adrenergic antagonists or sympatholytic agents. Direct acting adrenergic drugs are classified depending upon their selectivity towards target receptor (Furchgott, 1972).

3. History: Adrenaline was first extracted from adrenal glands in animal tissues in early 1901 by Takamine. This natural hormone gave rise to the concepts of synthetic adrenergic drug agents over time. In the 1940’s different classes of β-receptor drugs were initially reported and the isopropyl analogue of natural norepinephrine was first synthesized as beta receptor selective agonist drug isoproterenol and first used in Germany. β1 selective dobutamine was approved in 1978 and β2 selective terbutaline was approved in 1970 in UK.

5. Chemical structure and Synthesis of adrenergics:

Adrenergic agents like dopamine, norepinephrine, epinephrine are syntheisized by a biochemical pathway that involves 5 enzymes as shown in the figure below. Tyrosine is commonly considered as the initiation point, though phenylalanine hydroxylase can convert phenylalanine to tyrosine when there is deficiency of tyrosine. Tyrosine hydroxylase is the rate-limiting enzyme in this pathway. It adds to the 3’OH producing L–DOPA (L-3, 4-dihydroxyphenylalanine). This step requires oxygen, tetrahydropteridine, and Fe2+ as cofactors.

One of the oxygen atoms in the oxygen molecule is incorporated into an organic substrate and the other atom is reduced to water. Inhibition of tyrosine hydroxylase normally can reduce dopamine, norepinephrine, epinephrine levels significantly being the rate-limiting enzyme. Then DOPA is converted by the enzyme DOPA decarboxylase into dopamine. The aldehyde analogue of vitamin B6, i.e. pyridoxal is used as a cofactor for this reaction. Then dopamine is converted norepinephrine by a copper-containing enzyme dopamine-beta-monooxygenase and at the end of the pathway, norepinephrine N-methyltransferase converts norepinephrine to epinephrine (Ophardt, 2003). 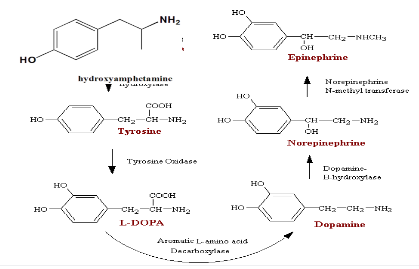 6. Available forms of the drug: liquid for injection

Adrenergic receptors, also known as adreno-receptors, are classified into two types i.e.alpha or beta receptors. These two classes are subdivided into alpha-1, alpha-2, beta-1, beta-2, and beta-3. Alpha-1 and alpha-2 both receptors have three subclasses. These are all G-protein-coupled receptors (Farzam & Lakhkar, 2018).

All beta adrenergic receptors are Gs coupled-receptors to

Adenylate cyclase is inactivated, which results in a decrease in cyclic adenosine monophosphate (cAMP).

Adenylate cyclase is activated leading to increase in cAMP.

Norepinephrine (NE) is secreted from the nerve at the synapse in response to a electric impulse or drug. NE binds to the alpha and beta receptor site. Its receptor action is inactivated by an enzyme like chloropheniramine, an antihistamine drug, inhibits the mechanism of norepinephrine (Nickerson, 2017). Norepinephrine activates alpha receptors and epinephrine activates beta receptors primarily (Creveling, 2017). Stimulation of alpha receptors is associated with constriction of small blood vessels in the bronchial mucosa and relaxation of smooth muscles of the intestinal tract (Dean & Reddivari, 2019). Beta receptor activation relaxes bronchial smooth muscles which cause the bronchi of the lungs to dilate (Ophardt, 2003). Stimulation of beta receptor also increases the force and rate of heart muscle contractions resulting in increased blood flow to all body organs and muscles that actively participate in the body's mechanism to combat stress (Fowler, 2019).

8. Side effects: Adrenergic drugs have many adverse effects. Selective binding to alpha and beta receptors can cause different side effects such as follows:

8. Delbarre, B., & Schmitt, H. (1971). Sedative effects of α-sympathomimetic drugs and their antagonism by adrenergic and cholinergic blocking drugs. European Journal of Pharmacology, 13(3), 356-363.

Remember, at the center of any academic work, lies clarity and evidence. Should you need further assistance, do look up to our Pharmacology Assignment Help