Theories of Motion and Energy

Table -1 represents the length of strings (cm) and the measured value of time (second) for trial-1, 2, 3 and 4. Range value from result listed in table.

Average value and relative range calculated and listed in table.

For the 10cm length string, average time was 1.04 second. That means parachute can hang in air up to 1.04 seconds for 10cm string length.

For 20cm length string, average time was 1.14 second. That means parachute can hang in air up to 1.14 seconds for 20cm string length.

And last for 50cm length string, average time was 1.83 second. That means parachute can hang in air up to 1.83 seconds for 50cm string length.

From this results equation as per below,

But the average value of time as per practical result from table Y2 = 1.14 Seconds

Below Parameters affect for this result.

C =Coefficient of drag, it’s determined by aerodynamic object type. As the speeds up the drag force increases. 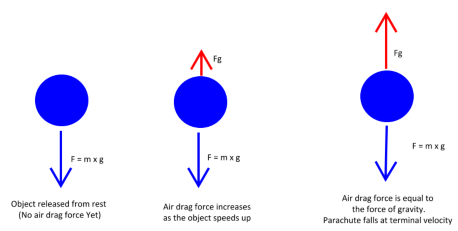 3. Air Resistance:- The resistance force acts on parachute by air, in this case more air resistance occur for increase in length. The momentum of force is proportional to area of surface. If Surface area increases, the air resistance increase. It is known as drag force.

4. Acceleration:- Due to time value changes, the value of Speed changes. Value of acceleration increase due to momentum of external force applied. It is related with the value mass of parachute.

5. Gravity:- Pull force on Parachute, which attracts different masses. If the mass of object known, the strength of gravity can be find. Increase of mass, gravitational force increases. F= m x g, Value of force is 9.81 m/s2.

6. Material :- The material should be wind resistance, strong, thin and light weight. Air went added in parachute for reduce the spin action.

There is no external force for parachute, so it will stay stationary in the balanced force condition and Parachute start travelled at constant speed due to momentum of force acting on it.

Experiment to design parachute to carry 50g mass and table-1, Graph-1 and Graph-2 represents the result about that longest parachute took much time to drop. From graph equation generated which having error. The error obtained for small length is less, and it will not more effect on the accuracy of the result and for large length error obtained will effect on accuracy of result and it cannot more precise.

Remember, at the center of any academic work, lies clarity and evidence. Should you need further assistance, do look up to our Modern Physics Assignment Help