Get the Sustainable Development Through Wind Energy In U.S.A

Summary: This report is dedicated to explain how wind energy is helpful to ease out the industry oriented work perfectly. Some laws states that energy cannot be generate and destroyed and it is easy to change its one form into others. All times, natural resources are not helpful to produce energy. In this situation, one should aware of the effective way to produce the electricity. No other methods sound to be great as wind energy.

History of wind energy: Taking the brief overlook of the history, there was the rare utilization of wind energy. However, the emergence of the windmills is proven to get the electrical energy without paying high fee. Now-a-days, wind mill brings the new shape of electricity generation with solar methods. Some facts and figures tell that last century and half there was the great utilization of this. 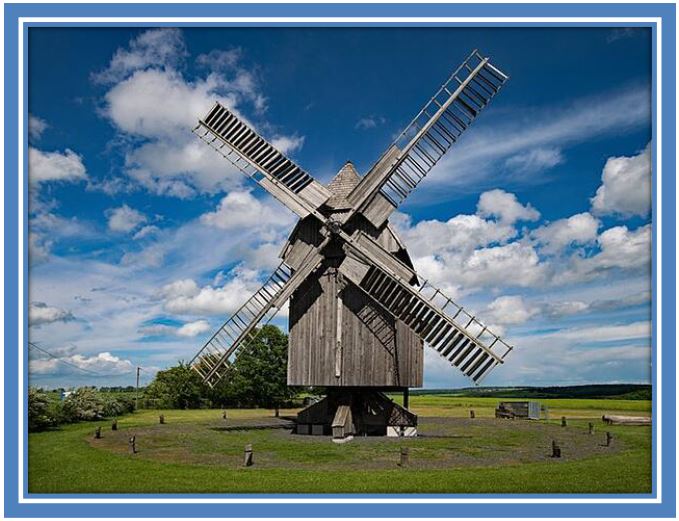 Before the evolution of the wind turbine machine, people are using the wind energy. It generally propels the boat around the Neil river region in the centaury before the 5000 B.C. There has been seen that pump water and grind grain will take place in the B.C rage of 500 to 900. They did not imagine the real power of wind to streamline the typical mechanical work into simple one. The grand utilization of this machine has noticed in the food production. Nearly 1000 A. D., the wind power technology spread their presence to the European countries such as Nederland and many other co-related regions.

With the genuine effort of Daniel halladay and John Burnman has founded the U.S. wind company on the land of the land of the American West. IN 1890, the wind powers in North America are beneficial for farmer to separate the dust particles from the heap of the harvested cereal and rancher pump has been used for the irrigation and windmill produces the electricity for home and other businesses. With the intention of performing the speed of the windmill, traditional blades had been replaced with sttel

All of us know that almost industry related work and domestic work depend on the electricity. Supplying the electricity to such massive population is not easy and imposing of some scientific method help to overcome these challenges. Thereby, there is the sure need to understand what wind energy is. In this method, wind is process in some technical concept to produce electricity. That’s why wind turbine translates the wind energy into kinematic energy dynamic energy into wind in the form of mechanical power. The generator will be helpful to turn the mechanical energy into electricity. With the aid of this mechanical energy, various works have been proceed whose ignore cannot be possible. Otherwise, there might be direct and indirect impact on business production. Many traditional works happen with the power of wind energy.

Key attributes which affect the production of electricity

The wind is the form of the solar energy which can produce with the combination of three events. These concurrent events are illustrated in the below mentioned list.

1. Sun does not equal produce heat on the atmosphere

2. There are some irregularities on the earth’s surface

3. The rotation of earth

With the principle of aerodynamic principle, the wind turbine converts the wind energy into electricity with the circular movement of rotor blades. This works in the same way as the airplane wing and helicopter blade does. The difference in the air pressure in the left and right side blades produces the lift and drag. This rotor interconnects generator either directly connect to drive turbine or through the shaft and series of gears. In this way, there rotation speed would be increased. After a while, the movement of aerodynamic force to central movement yield the electricity.

Horizontal axis turbines: Horizontal axis’s are those turbines which are used in the general purpose programs. This turbine uses the three blades and proceed its working on the unwind concept. These pivots are positioned in the top position of the tower so that blade faces into the wind. 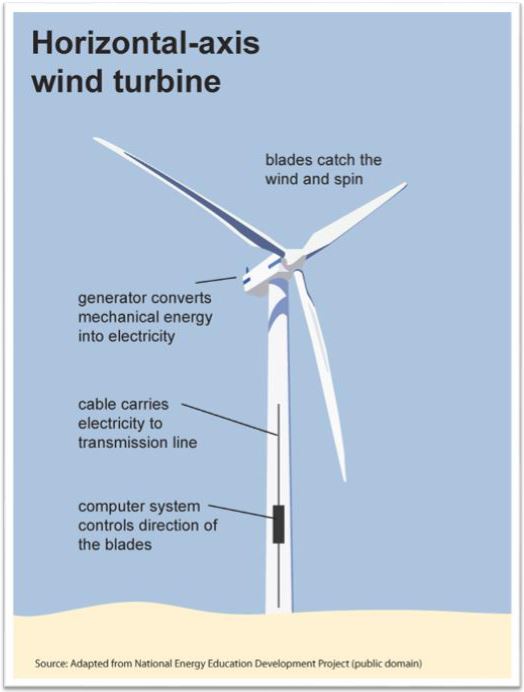 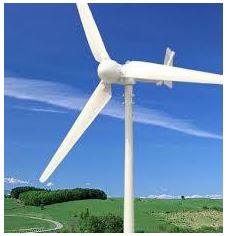 Let us take the brief discussion of all turbines:

The power of the utility scale wind turbine has been measured in 100 kilowatts to several megawatts. It is command that cost of the larger turbine is quite expensive. In this various plants are grouped into one which ensures to give the high power to electrical grid.

Single small turbine: It contains the small group of turbine whose energy is less than 100 Kilo watts. It is alternatively known as the hybrid wind system.

Availability of wind turbines: The working of the water would be great in case it will be developed in the large land space and offshore region with the voluminous water contaminate. The placing of these wind turbines has been done on the edge of the ocean and lakes. The emergence of this water turbine eases outs the regular working procedure. To get the work processing of this machine in better way, this U.S energy department currently launched various project to facilitate to offshore deployment in various region.

Glance Over the Advantage of Wind Power

Wind power is cost-effective: Since the working of wind power relates to natural resources in form of sun shine, air and solar energy, none of you need to pay extra money for this purpose. It uses the land based utility wind in the lowest price tag. The cost of wind energy is about to calculated two to six cents per hours. Since the fuel of the wind energy is free, there is no possibility to increase the price value of this product anytime in future generation too.

Provide the optimum job possibility: It is generally observed that U.S. wind sector provides the plenty of technical job in 2016. There is the sure demand of wind turbine technician and proven to be fastest growing job. The report of wind vision tells that wind power has the enough potential to provide more than 60000 jobs in the manufacturing, maintenance and installation. More and more people will get job in same field by 2050.

Wind births the U.S, growth and U.S competitiveness: The wind has the annual economic of $ 20 billion on the U.S. economy. The united state holds the effective and enormous resources and competent workforce. They know better to strive against the competitors and committed to provide the most essential and satisfied service.

It uses the clean energy resources: Wind energy does not incorporate bad impact to environment and does not intended to pollute air anymore. It does not matter that how much cleaning would be achieved or not. The fuel of this matter does not relate to coal, wooden and any other materials. On the combustion of this fuel, it emits the harmful gases such as nitrogen gases and sulphur di oxide. In this condition, there lies some health issue and economy damage.

Wind becomes the domestic source of energy: It is generally observed that all nations contain the plenty of wind and exhaustible. With the passage of time, cultimative power supply is the united states are increasing 30 percent per year. This wind is considered as the largest renewable energy

Sustainability: There is no doubt that wind is a form of the solar energy. This energy can be produced heating the surrounding environment with sun, rotation of earth and other earth surface irregularities. Whenever sun shines and wind breezes and blow, the energy produced can be harnessed to send power to overall grid.

Wind turbines stand their presence in existing farms and ranches: It gives the major benefits to village and undeveloped area, but they do not compromise the best wind sites. Farmers and ranchers are committed to do their work because wind turbine uses the small fraction of their land. In exchange of this positive benefit, these wind power owners give the justified payment for their used land

It strives to compete the conventional energy resources on cost assessment: First of all, there should be do the proper investigation what the energetic level of the site is. It is not mandatory that wind farm is not cost effective and force to lower conventional energy resources due to competition. On the controversial side, it is observed that the cost of the wind power has been decreased from the standard price option. So, it is essential that technology must use the higher initial investment in comparison to fossil friendly fuel.

Wind resources development should be most profitable land of the concerned area: Wind turbine technical must have the ability to check out which land would be great for the wind turbine plant installation in the applicable rural area. In addition this, they must give the full idea what alternative land is likely to suitable for the installation of those plants.

Turbine creates the noise and non-ignorable pollution: it is generally seen that turbine yields any unfavorable outcome to environment as other conventional energy resources provides. The rotor speed of turbine blade yields to produce noise. In this way, there is no sign that the air quality of environment worsen. But, it brings in the other pollution category which is known as the noise pollution.

The life of fauna disturbs with the operation of the wind turbine: As soon as a few birds fly near about the spinning blade of turbine, these species feel difficulty to live their deserved life cycle. As a result, it is quite possible that life cycle of these birds in damaged condition.

This essay will tell how wind energy is considered the electricity generation in tight budget as well. The great number of turbine plants have been seen in us region and plays an important role to make their economy. It opens the doors of employment for several persons.

Remember, at the center of any academic work, lies clarity and evidence. Should you need further assistance, do look up to our Global Sustainability Studies Assignment Help