According to the expectancy theory, the behaviour or an action of an individual in a particular way happens because they are motivated to act in that particular way over all the other behaviours (Lawler & Suttle, 2013). In other words, the outcomes of any act are determined by the motivation behind that act. Expectancy theory is nothing but the mental processes regarding the choices made by the individual. In short, it simply talks about the reasoning behind the different choices an individual makes. It was first proposed by the Victor Vroom of Yale school of management.

In the recent times, organizations have given a lot of importance of the expectancy theory. In that term, it states that it is very important of an organization to pay a lot of the attention in what they offer to their employees as rewards (Baker & Stone, 2018). It must be directly related to what they aspire of or what they are motivated for. If the rewards match with their expectations, then they will work hard towards it and hence it is indirectly going to affect the performance of the organization as whole. 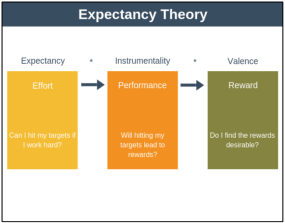 Some of the examples of expectancy theory are:

a) A student choosing of going of masters after that bachelors rather than joining a job. This is because his motivation of second degree was greater than the money he will earn through the job. He will perform very well at the university where he will do masters rather than he would have done at job.

c) An employee wants to the office because he wishes to be good in his boss eye. He everyday makes that attempt and comes early to the office. He is regular and consistent in doing so. Ultimately, he gets noticed in the eyes of his office because of his sincerity and hard work. He gets promoted in the next cycle.