These risk factors include:

Q.2. Cerebrovascular accident is a medical term used to define a stroke. A stroke is a condition when a blockage or a collapse of a blood vessel prevents blood flow to a part of the brain (Schmid et al., 2019). The brain is considered as the body's primary information-processing organ and it is responsible for regulating several complex functions in the body. Stroke inhibits the blood supply in brain and then the brain cells start to die which leads to brain damage. Stroke is basically a type of brain injury that is caused by an unexpected disruption in the brain's blood supply. It usually happens when region of the brain does not obtain the required blood flow for one of two reasons. These reasons either involve interrupted blood supply to part of the brain or because a blood vessel breaks and blood invades the surrounding areas of the brain (Schmid et al., 2019).

“The anatomical studies of brain have revealed that blood is carried to the brain through the internal carotid arteries and vertebral arteries”. A single basilar artery is formed by the right and left vertebral arteries. The middle cerebral artery is the most usually blocked artery due to oxygen deficiency in brain. Strokes can lead to loss of sensation, speaking difficulty, walking and seeing issues because of oxygen deficiency in the brain (Ebihara et al., 2020). Presence of a blood clot can also block an artery or part of brain and since every part of brain has a characteristic function so the function is impaired which often result in a stroke. During a thrombotic cerebrovascular accident the brain does not receive required blood. This disturb the aerobic metabolism of the brain cells. Impaired aerobic metabolism lead to cell death which result in permanent disability or death.

Q.3. Both the ischemic and hemorrhagic strokes has the ability to bring devastating clinical outcomes although they have different pathophysiology. According to (Hatleberg et al., 2019), ischemic strokes are more common in comparison to the hemorrhagic stroke as 80 out of 100 strokes are ischemic strokes. An ischemic stroke is a condition in which a blood clot usually blocks an artery which supplies blood to an area of the brain. However, a hemorrhagic stroke is a condition in which an artery ruptures or leaks in the brain. The Intracerebral hemorrhage comprises of 10-15% of the total strokes and it occurs from conditions such as increased blood pressure. Increase in the blood pressure can exert greater pressure on the arterial walls (Sommer, 2017).

These strokes are common in people in which the arterial walls are already impaired because of conditions such as aneurysm, arteriovenous malformation and atherosclerosis. However, the ischemic strokes which are also known as cerebral infarcts results due to emboli development in the brain. Emboli lead to blockage and this brings up oxygen deficiency in tissues. Reduced oxygen circulation in the brain lead to neuronal cellular injury and it also brings inflammatory response and neuronal death. Major difference between the ischemic and hemorrhagic stroke is that the ischemic stroke represents and reflects the diffused cerebral vascular pathology (Sommer, 2017). However, the hemorrhagic stroke enhance the exposure of brain to harmful effect of blood. 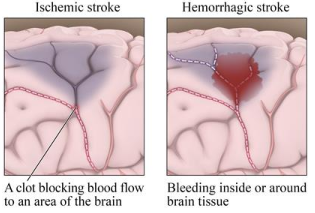 Yun is a 79 years old male who is experiencing severe symptoms of left-sided arm and leg weakness, followed by left-sided facial drop and slurred speech. He also experienced sudden onset of severe headache which is one of the most common clinical manifestation of a stroke. People experiencing stroke usually appear these symptoms before actually having a stroke. Yun is experiencing these symptoms in addition to previous history of 2 ischemic strokes which indicate his vulnerability to get another potential cerebrovascular accident.

Q.5. The FAST assessment tool can be used to assess a person with potential cerebrovascular accident (Williams et al., 2017). It is also known as the Face Arm Speech Test. It is a 3-item stroke assessment tool which is used to assess speech disturbance, facial weakness and arm weakness. Presence of more than one condition in a person can depict possibility of a stroke. Ultimately, it is an acronym which is used to classify all the symptoms of stroke. The FAST assessment tool is used to identify a stroke in emergency patients (Nogueira et al., 2017). The FAST acronym can be described as:

If I suspect a person of having a stroke then I will use a FAST assessment tool to identify the early warning signs. Primarily I will check for facial weakness then I will check arm weakness. Further I will analyze speech impairment and then call 911 immediately. Facial weakness, weakness in left hand and leg and blurred speech are the most common symptoms of stroke. Timely recognition of these symptoms can prevent patients from serious morbidity and mortality.

Potential health issues that can impact Yun include hypertension, obesity, lack of physical exercise and diet rich in salt intake. Hypertension or increase in salt intake in the diet can damage the blood vessels (Santisteban & Ladecola, 2018). It ca narrow down, leak and rupture the blood vessels during prolonged exposure. High blood pressure can result in blood clots in the arteries which can be a potential case of stroke. Obesity and lack of physical exercise increase the impact of hypertension and hence it can increase the probability of stroke.

Q.8. The potential risk factors for Yun suffering from a cerebrovascular accident include:

Modifiable risk factor that can reduce the risk of cerebrovascular accident for Yun include diet rich in salt and lack of physical exercise. Cutting of salt from the diet and enhancing physical exercise in life style can reduce high blood pressure and it can ultimately reduce the risk of cerebrovascular accident (Liao et al., 2016).